What stops people with a learning disability going out in the evening?

What stops people with a learning disability going out in the evening?

Prompted by the findings from Mencap’s Going Out and Nightlife Survey, our Ambassadors met recently to discuss the barriers that stop many people with a learning disability from going out as much as they would like to.

Last Autumn Mencap ran an online survey that was open to people with a learning disability aged 18 or over. 422 individuals responded to the survey. Obviously, the survey was undertaken before Covid entered our lives.  The discussion our Ambassadors had recently therefore reflects that new reality. However, both the survey and our own discussion show that coronavirus and lockdown are far from being the only reasons that stop people with a learning disability from going out as much as they want to.

This blog captures some of the things that came out of that discussion. Our Ambassadors reflect on both on Mencap’s findings and their own experiences.

“I would like to go out more in the evening”

70% of people responding to Mencap’s survey either agreed with this statement or strongly agreed with it.

Daniel: “This is not a surprise at all really, no.” 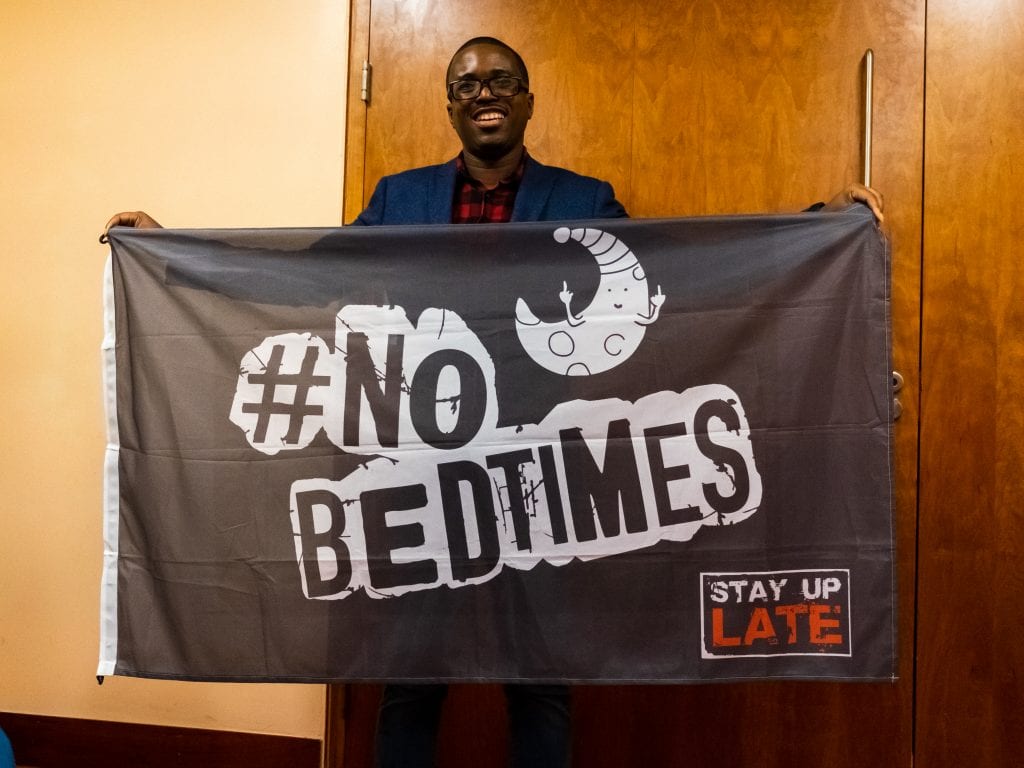 Barriers to going out in the evening

“I don’t have anybody to go out with”

Nearly half (46%) of people responding to Mencap’s survey gave this as one of the reasons stopping them going out more in the evenings.

Rohan: “Gig Buddies will be even more important when we’re able to go back to going to gigs again.”

39% of people in the survey gave this as one of the reasons that stopped people going out more, the second highest.

Jason: “Some people are arrogant or immature and they don’t have a level of understanding what a disability is.”

Paul (Stay Up Late Director): “This question was about people being worried about being abused wasn’t it. And I think this is interesting because generally through our work with Gig Buddies we find that most people are lovely and we very, very rarely hear any stories of people being nasty to people.”

Victoria: “If you did a percentage on how much this would happen I think it would be very, very slim because it’s only very occasionally that people are being rude to people when they’re out. So if people are worried that people are going to be horrible we need to do more to reassure them.”

Daniel: “I think the only time we’ve had anyone horrible is when we were coming back on that bus from Brighton when we had that idiot on the bus who got drunk and started abusing everyone. We even gave him Pringles to shut him up but that didn’t work.”

Nicole: “I would feel more confident if someone was with me.”

Rohan: “I think it goes back to changing attitudes. Telling people what a learning disability is. Maybe use the film we did with Open Future Learning.”

“I don’t have the support I need”

Just over a third (34%) of those responding to Mencap’s survey gave this as a reason that was stopping them going out more in the evenings.

Nicole: “I would agree on that.” 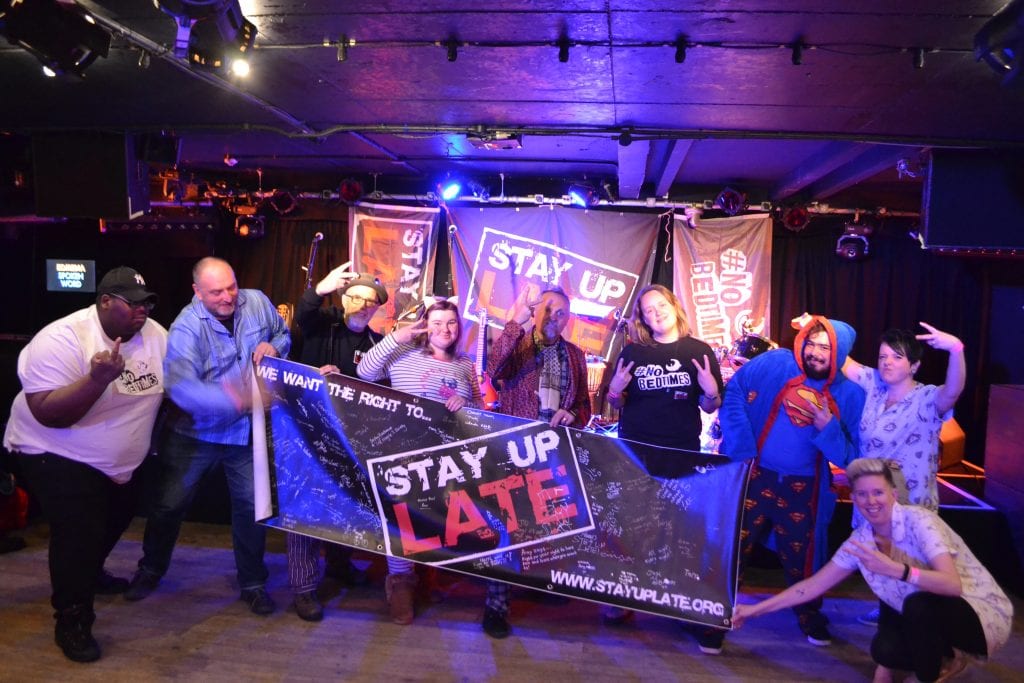 “No accessible events, gigs or things for me to do in the evening”

A quarter of people responding to the survey (25%) gave this as a reason why they didn’t go out in the evenings.

Victoria: “I think I’ve done that where we’ve gone around Bognor and Chichester and we’ve done like a venue check and you put the results online. So people know before they even go to the venue what they’re facing.”

Nicole: “There are not enough toilets on trains as well.”

Ian: “One irritating thing is the ramps on the buses aren’t always working.”

Richard: “With this covid I’m absolutely scared to death to go on public transport, even going into town.”

25% of people responding to the Mencap survey said that this was one of the reasons stopping them going out more. It was less of a problem for some of our Ambassadors but they all acknowledged the difficulties for many people.

Jason: “If you’re living independently and you have loads of bills to pay and your support it must be really difficult for a lot of people.”

Ian: “If you don’t have money all the time you can still have fun in the back garden with your friends.”

Obviously, since the survey coronavirus has become an issue. Other reasons came up, too, such as fear of the dark and personal safety.

Phillip: “I only go out for shopping. I’ve had a letter to say I can’t go out but I’ve got to go out for the essentials. You can’t live on no food at all.”

Victoria: Another reason where I don’t go out is where the time changes when it gets darker faster because I find that I don’t really like the dark. I don’t feel safe walking home. But I have a power battery with me, my phone’s charged and I bought a new torch.”

One obvious thread running throughout our discussion was how unsurprised our Ambassadors were with the survey’s findings and how much they chimed with their own experiences and those of their friends. Stay Up Late’s Director, Paul Richards, offered his own perspective.

Paul: “The most shocking thing is that we’re not really surprised. These are all the things we were expecting to hear. Before we started Gig Buddies I did some work with University of Brighton to find out what reasons there were why people weren’t going out of an evening. Eight years on there’s only one thing that’s changed and that was covid. All of the others are the same. It feels like things aren’t moving forward as much as they should do although in that time we’ve set up Gig Buddies and we’ve now got lots of other Gig Buddies going so in our way we’re trying to change things.” 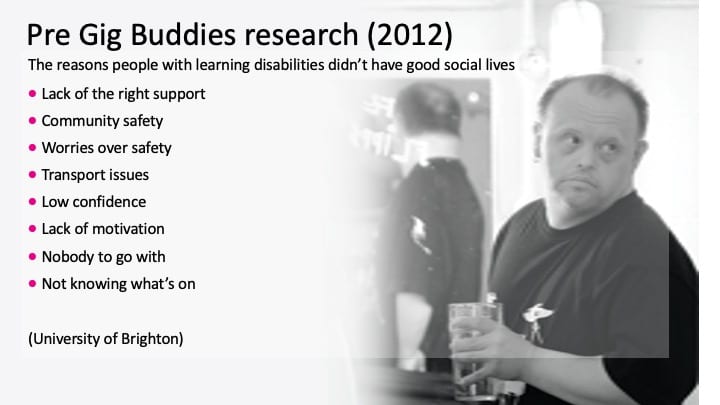 Victoria was keen we end the discussion on an optimistic note.

Victoria: “I think we have to remind ourselves about Covid-19. It’s not going to be there forever. Once we have a vaccine I think nearly everyone will have the vaccine and if we do what the government says we just have to listen to the rules. If we don’t more people are going to die from this virus. And we just have to say to ourselves we’re not saying goodbye to gigs. It’s only while we’re fighting this virus off.”

Like everyone else we are forced to operate within the constraints imposed upon us by the coronavirus pandemic. However, that will not stop us from continuing to fight for the right to party – and for adults with learning disabilities to be able to live the lifestyle of their choosing. Like Victoria, we look forward to going to gigs again – and we’ll be fighting hard to ensure no-one is prevented from going on account of having a learning disability.

We are grateful to Mencap for sharing their Going Out & Nightlife Survey findings with us.

We’ll leave you with the video that Rohan mentions – A Day In The Life highlights the importance of changing public attitudes.