Our intern Martina interviews Kate and Saskia this month to find out about The Wild Rainbows group turning three!

It is no coincidence that it is the time of the year when the Wild Rainbows celebrates its 3rd anniversary at the same time as LGBT history month. Kate, who helped establish the Wild Rainbows, explained that LGBT History month was launched in 2005 to coincide with section 28 being abolished. The Month is to raise awareness of and combat prejudice against the LGBT community while celebrating its achievements and diversity and making it more visible – so it seemed perfect that we would launch the group during this month. 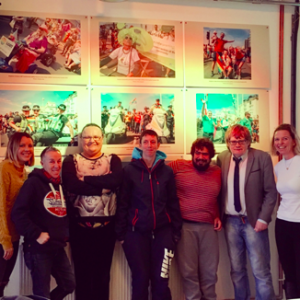 The Wild Rainbows usually meet every couple of months. Participants like Saskia say: “It is always inspiring to meet up with people and have some fun by making a difference in this world.”

And how have they made a difference in the world? Three years on from the launch they now have 14 members and have been invited to the LGBT community summit, taken part in two university research projects about hate crime and are part of a focus group for planning Brighton Pride.

Kate says: ‘Their voices are definitely being heard and they are increasing visibility of LGBTQ+ people with learning disabilities in their community.”

Having social time together is equally important to the group and favourite socials have been The Ladyboys of Bangkok, Drag bingo and, most importantly, marching in Brighton Pride three times.

We all deserve to live in an inclusive modern society where LGBTQ+ rights are promoted as well as respected. The Wild Rainbows have been keen on fighting the prejudice so that this world can be enriched by diversity in terms of LGBT+ people with learning disabilities.

You can also listen to Rohan here being interviewed by BBC Sussex about the Stay Up Late and Gig Buddies team taking part in Brighton Pride last summer.