Last year we held our first ‘Punk AGM’ – we thought it went so well we’d do it again, and this time loads more people turned up. As a new charity we’re really keen to make the most of our charity Annual General Meeting and this is the second year running of us opening it up to anyone who wants to come, so we can use their ideas to develop our work.

Read more about it here… 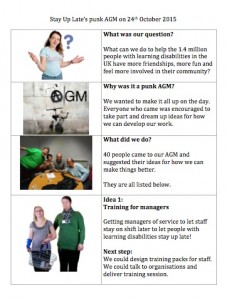 At our Punk AGM this year we asked the question: 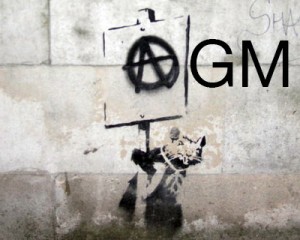 What can we do to help the 1.4 million people with learning disabilities in the UK have more friendships, more fun and feel more involved in their community?

We called it the #Punk AGM because it’s all about making it up on the day – using the true spirit of punk. Everyone who comes is encouraged to take part and dream up ideas for how we can develop our work. This year we had people with learning disabilities, parents, volunteers, trustees, staff, people from other organisations and friends of the charity (like the Brighton Centre), we didn’t get any local authority staff along but we’re working on that for next year!

In all 40 people came along and contributed by suggesting their ideas and leading mini-workshops to develop each idea.

Punk Idea No. 1 was: Getting managers of services to let staff stay on shift later to let people with disabilities stay up late! 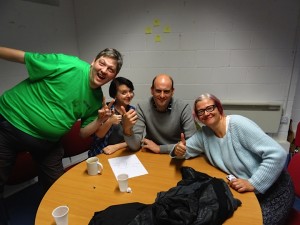 Getting managers to be aware of what Stay Up Late is!

Idea 2: Planning something fun with me

Punk Idea No. 2 was to help Emilia to plan something fun.

To have a session in a pub with karaoke on Fridays and Saturdays. (There’s a pub near Tescos in Eastbourne and Buskers on a Thursday).

Could also have a session making Christmas cards to save money and have fun together.

Gig Buddies, Stay Up Late and maybe other charities plus volunteers.

Punk Idea No. 3 was to get different organisations take it in turns to host events in their community for people with learning disabilities. 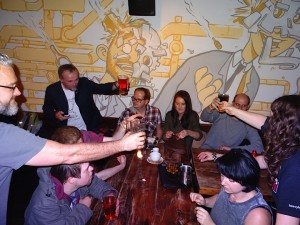 We support and educate them to make it accessible – help people with learning disabilities to access more mainstream events.

Claire, Bernie and Andrew would like to be involved.

Punk Idea No. 4 was: Gig Buddies beer cans – building on the ‘Buddies Beer’ brewed by North Laine for today.

The cans would have details about Gig Buddies on and a QR code that links to a video about the project. 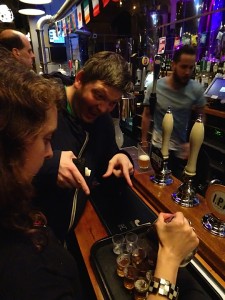 Picture of ‘Jane’ which says:

‘Jane wont get to drink this at the pub. She hasn’t got a local friend to support her to get there’.

Picture of ‘John’ which says:

Stats about x% of people living in social isolation.

Would be a way of generating income and awareness.

Punk Idea No. 5 was supporting people to go away for short breaks/weekends and holidays. For example inter-railing and clubbing holidays to Ibiza, Magaluf, Zante, Malia. 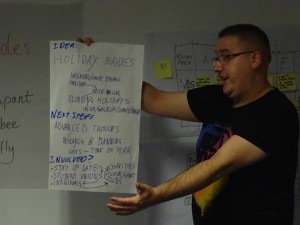 Have more advanced thoughts – research and planning to work out the costs and work out the best time of year to go.

Research the internet – find out who’s done this before

Idea 7: Feeling safe in the city 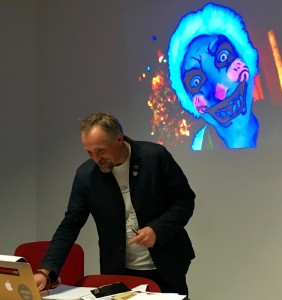 Punk Idea No. 17 was for Gig Buddies to be involved in combating more hate and mate crime and enable people with learning disabilities to feel safe in the city and also widening the community of people involved.

Why do we not address it?

Educate the teachers/workers – 8-9 years up.

Campaign about mate crime which is still not against the law – it’s not seen as a disability hate crime.

‘Empowered’ to say NO! – we are all responsible

Idea 8: Being a friendly city 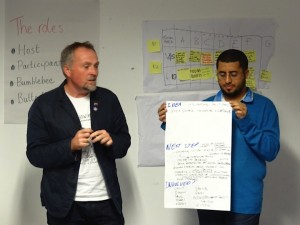 Punk Idea No. 18 was was from Rebecca from the Brighton Centre, which was working out how to be more welcoming and friendly to people with learning disabilities.

Be part of working with tourist boards.

Loads of ideas about how to make things accessible

Present this info to organisations in the city.

The journey from deciding to go to getting home:

Complaint letters – so venues learn then things will change

Staff disability training and be involved in asking questions

Punk Idea No. 9 was a Lewes FC music festival

DJs from Kiss My Disco, Blue Camel, Stay Up Late

Set up a committee

Hold it on 7th May 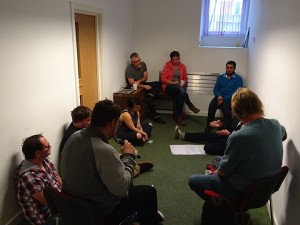 Punk Idea No. 10 was Dinner buddies

Have a budget on food to spend.

Everyone brings a dish – starter, main and think about diet needs

There’s a prize at the end

A helper to organise the evening with dates and the time

Punk Idea No. 11 was getting schools involved. Linking it with the Duke of Edinburgh’s Award.

A session on Gig Buddies 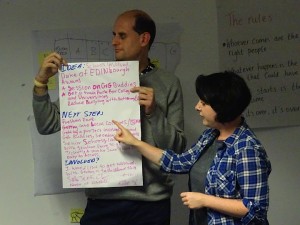 Get a training pack for colleges and universities

Getting in to local colleges and BIMM

Getting a project involved around Gig Buddies in secondary schools

Senior schools linking up with student union to get gig tickets and make sure they are easy to access.

Punk Idea No. 12 was to reach out to people who could find it harder to join Gig Buddies so they can find out about it.

Doing a focus group with carers and a support worker

Punk Idea No. 13 was developing the relationships between buddies 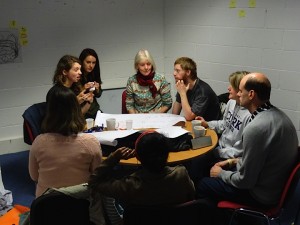 It’s hard to find time and people are busy.

What are Gig Buddies trying at the moment?

It’s good what Gig Buddies does already to support relationships. Things that could continue to develop are: 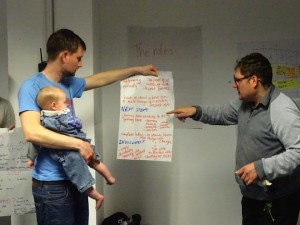 Punk Idea No. 14 was finding ways to influence politicians – local and national – around the issues facing people with learning disabilities due to government cuts.

Punk Idea No. 15: Stay Up Late and Gig Buddies are already active at Universities with regards to recruitment… but has a wider ‘awareness’ campaign been considered for schools or sixth form colleges?

Targeting younger people to make them aware of the 1.4m people with learning difficulties – and the problems they may face in leading active social lives. Educating and changing perceptions for the younger generation could be hugely beneficial in the longer term.

Is it possible for Stay Up Late to arrange school/college visits where they can present to younger people. I think a ‘fun’ presentation involving music, videos, games, etc. could potentially open younger minds to Stay Up Late’s philosophy that people with learning disabilities have exactly the same rights as anyone else to stay up late and be welcome everywhere they choose to go.

Buddying to start at schools.

Punk Idea No. 16: We know that certain artists/venues/promoters are not only aware of Stay Up Late and Gig Buddies but are actively supportive (The Hope & Ruin/One Inch Badge/Love Thy Neighbour/Atom Promotions, Brighton Centre etc.) – however, wouldn’t it be great if VENUES displayed their SUPPORT with PRIDE to the GENERAL PUBLIC?

A lot of product packaging display ‘Environmentally-friendly’ logos, LGBT-friendly pubs in proudly display rainbow flags … why not have a “Gig Buddy-Friendly”/”Live Music For Everyone” poster or window-decal for venues to display?!

A CAMPAIGN IN CONJUNCTION WITH ‘ATTITUDE IS EVERYTHING’? I realise that Attitude Is Everything have a venue CHARTER for venues, though there only appears to be 2 Brighton venues on it (Dome and Centre) … Linking up with AIE… How about targeting EVERY live music venue in Sussex?! Get them ALL proudly displaying their support… If every venue actively show its support wouldn’t that send a great message to the gig-going masses?!

Idea 17 – Finding out what people really want to do

Punk Idea No. 17 was asking all people with learning disabilities about what they would love to do/feel they are excluded from/excites them.

Create a list of possible activities and ask them what they would be interested in, note down responses

It was amazing to see so many ideas come up and now the way forward is for us, as a charity, to decide which ones we can take forward, which ones fit with our existing work, which ones may be a brand new project and which ones may be really good but were just not the right people to work on them right now.

We’re only a small charity so have to think carefully about what work we’re going to do so it can support the most amount of people.

Thinking back to the question at the start that’s only 1.4 million people! So now it’s down to the trustees, the Storm and Thunder Team and the staff team to start making something happen.

I’d also like to say a special thank you to our trustee Max, and his little boy Dillon (who did a short presentation on volcanoes) – Max facilitated the afternoon wonderfully and I really can’t imagine wanting to run our AGM any other way.