Here’s a guest posting from Alexis Bonari who looks at research to show how different sleep techniques may work in helping people to Stay Up Late.

These are not Heavy Load’s personal views and we’re grateful to Alexis for joining our site this month. Heavy Load did discover in Denmark that taking a 20 minute power-nap in a lay-by does go along way to helping get through a long journey – not even the satnav could save us on this one – we eventually found the place we were staying at at 4am, but that’s another story which we’ll post up soon. Lots of wine gums and coffee too – that helps.

Back to Alexis’ blog

How many times have you felt like there simply weren’t enough hours in the day to accomplish everything you were wanting to accomplish? What if you were given sixe more hours a day? How much could you accomplish?

The Science of Sleep

The human body needs sleep to perform important regenerative functions. While you sleep, DNA damage is reversed and your levels of stress hormones are significantly reduced. Until relatively recently, scientists have believed that an average individual needs at least eight hours of uninterrupted sleep a night to be at their best.

Some of the greatest thinkers who ever lived have proven science wrong, however. Leonardo Da Vinci was said to have developed a sleep pattern that allowed him to stay awake for 22 hours a day. By taking 20-minute naps every four hours, he was able to maximize his waking hours with no reported physiological difficulties. 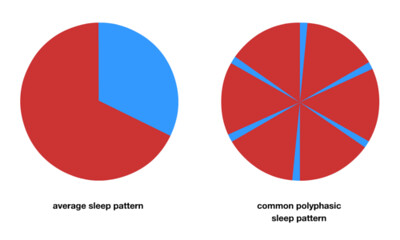 Recently, sleep scientists have concluded that there might be some truth to the reports of Leonardo’s legendary sleep schedule. Human sleep patterns consist of five stages of non-REM sleep followed by REM sleep. During REM sleep (or Rapid Eye Movement sleep), the body undergoes most of the repair processes required to feel rested. Further regenerative functions occur during the fourth and fifth stages of non-REM sleep, and these functions are thought to be directly linked to preventing early aging.

When you’re sleep deprived, your body drops into REM sleep as soon as you close your eyes. Therefore, some sleep scientists believe that you can potentially increase the efficiency of your sleep cycle by training your brain to transition directly into REM sleep, bypassing the other stages entirely. Proponents of Polyphaisc sleep attempt to do just that.

Adherents to these two sleep cycles claim that the Everyman is much easier to adapt to a normal lifestyle that requires extended periods of activity during the day. The Uberman works, but requires longer for the body to adjust to the new schedule.

There’s no way to ease yourself into a Polyphasic sleep schedule. Most of the practitioners of this lifestyle suggest that you expect to be incapacitated by fatigue for the first two weeks of adjustment. It is absolutely crucial that you avoid missing any naps during the first month. Your body will eventually learn to wake up at the end of a nap without the use of an alarm clock. This takes time, and most report that they reached this point within two months of starting the program.

There are some health issues to consider as well. If you get sick, you will have to switch back to a monophasic sleep system so that you get the benefit of a full sleep cycle. This will help your immune system to get back on track. Also, some Polyphasic sleep enthusiasts claim that the sleep system contributed to their depression as they had more hours to fill each day.

Bio: Alexis Bonari is a freelance writer and blog junkie. She is currently a resident education blogger and performs research surrounding College Scholarships. In her spare time, she enjoys square-foot gardening, swimming, and avoiding her laptop.