Part 2 of the Stay Up Late story – touring, TV and songwriting

The second part of the talk I gave at this year’s Great Escape festival in Brighton telling the story of Heavy Load, how Stay Up Late came about and where we are now… 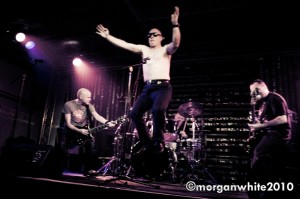 The Heavy Load movie changed everything and saw us go on to play in NYC, Copenhagen and Glastonbury festivals. This photo was taken at one of our best ever gigs in Berlin, and we also toured the UK extensively.

In terms of breaking in to the mainstream we ended up supporting acts like Sham 69 (at the Astoria) The Blockheads and The Dhol Foundation and featured in the national press, TV and radio. 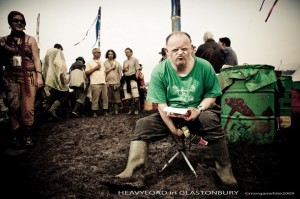 Here’s a photo of Michael enjoying some chips at Glastonbury.

This also enabled me to fulfill one of my ambitions. To say “hello Glastonbury!”

We’ll be returning to Glastonbury in 2013 with our Gig Buddies project – and more on that later.

The topics of songs ranged from the vaguely political (I Aint Got No DLA, and Everything is Bollocks) to appreciations of the work of George Michael, and general observations made by Simon (Farty Animals, Sexy Films). They also spoke of some of the more bizarre things we encountered on our travels (Julie’s Beard). We are always grateful too for the patient and hugely talented Jake and Toby at Metway Studios who totally got the way we worked. 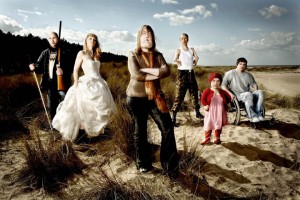 As more people got to hear about us more doors opened and one very exciting day we got a call from the people at Eleven Films who wanted to commission us to provide the theme tune for the Channel 4 drama series ‘Cast Offs’. The brief was ‘anarchy, noise, music you wouldn’t normally hear on the TV, you know that sort of thing…’ – well that was a pretty easy brief to follow as it only described what we could do. The producers commented that they liked our can do attitude. It’s a good job they’d only asked us to do the things we actually could do!

While we always existed on the margins of what we saw as the music industry we felt that in some way we’d become part of the cultural landscape, and to get a TV theme tune was a great achievement for us.

What was also nice was that the producers never made a big thing that people with learning disabilities had written the theme tune. 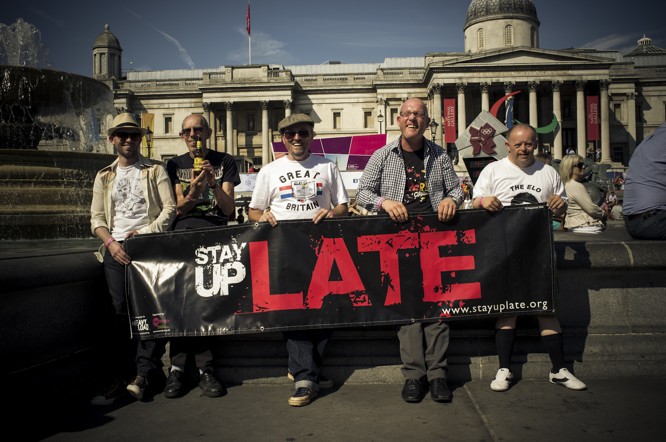 Then in September 2012, after 15 years of anarchy and mayhem our drummer, the wonderful Michael White, decided that it was probably time to retire gracefully and we’d also been invited to play in the Paralympic Festivities in Trafalgar Square and so the stage was set for one final gig, and what a way to bow out?!

It was great to see some old faces too who’d met us through the film and on our travels, and the legacy of Stay Up Late lives on as we try to enable more people with learning disabilities to lead the lives they want to. Just like Jim did at the start of Heavy Load’s journey.

Next there’s more on how Stay Up Late grew in to a national movement and a charity.