In my previous post I was reflecting on why I was thinking of taking down our petition calling on US punk band Descendents to change the name of the new LP which features the word Spaz.

Unwittingly I unleashed a whole torrent of abuse from across the pond telling me to keep my nose out of cultural issues that I don’t understand, and then how we started to hear from citizens in the USA who also find the word ‘spaz’ offensive and harmful.

But whilst writing this I also had an amazing update.

For many years Brian and Becky Boo have been supporters of our work and are also regulars at Rebellion Festival in Blackpool. Milo Aukerman, the lead singer in the Descendents, had kindly offered to meet with me for a beer to chat about this whole issue and whilst I was unable to make it Brian and Becky Boo were able to go in my place.

They met the band on their tour bus and discovered that Milo was really mortified to find what the word ‘Spaz’ means in the UK and actually feels really uneasy now about promoting the album in the UK. 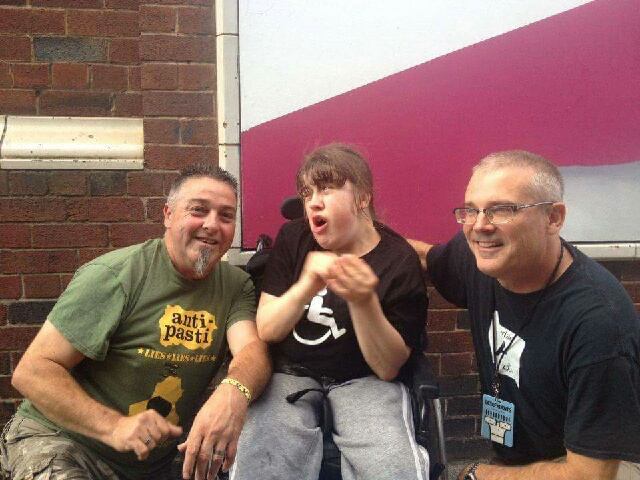 Here’s some words from Brian about their meeting

As Becky Boo and Myself were driving along the Promenade, we received a call from Milo of Descendants. After a brief chat, he arranged to meet us at the band’s tour bus for a chat. On arrival we were met by Milo, who shook our hands and invited us onboard.

After introducing ourselves, we got down to the business in hand, that Album!

Milo was genuinely shocked by the meaning of the word “Spazz” in the UK, because in the USA it means to be hyper/pumped up . He was also shocked by the way the fans of Descendants have reacted to Paul, for making a stand against the Album.

After much intercontinental slang comparisons, and lots of laughs (fag was mentioned a few times), we parted company, but not until a photo opportunity with Milo and Becky Boo.

So summarise. .. Milo is a very nice guy, who is genuinely remorseful over the use of the word .

This was just amazing to receive (and lovely to see Becky Boo proudly wearing one of our Gig Buddies t-shirts for the meeting too. They’re on sale by the way on our online shop – that’s a joke for Descendents fans who accused of doing this just to sell t-shirts!)

When we launched our campaign to boycott the Descendents new album I thought our beef was with the band. However, they genuinely didn’t appear to know what a harmful word ‘Spaz’ is in the UK.

As part of this campaign I’ve since done some research which indicates it is a harmful word in the US too but is so widely in use that it’s true meaning seems to have been lost and forgotten, which is a harmful, isolating and dangerous thing for people still affected by it.

What I’ve found to be appalling though is the reaction of some fans of the band who have resorted to homophobic, disablist and racist insults against me because I stood up and said something.

I thought I was up for the fight when I started this campaign and after nearly 3 weeks of abusive emails, tweets and Facebook posts there has been a  toll on my mental health.

Just imagine what it is like to live with a long-term condition, or disability, and have a life-time of abuse. I’m hoping, in some way, that our campaign will have made some people reflect on their use of language and perhaps opened their hearts a little (or a lot) towards their fellow humans who also have disabilities (and may well also be fans of bands like Descendents.)

A common criticism from fans of the band was that the band would never intend to cause harm to anyone with a disability. And that is clear. However, even inadvertent language can easily create the conditions, and culture, in society where it becomes easy for people to become the victims of hate crimes. Whilst the band didn’t intend any harm so of their fans seemed to find it quite easy to use words to inflict damage. 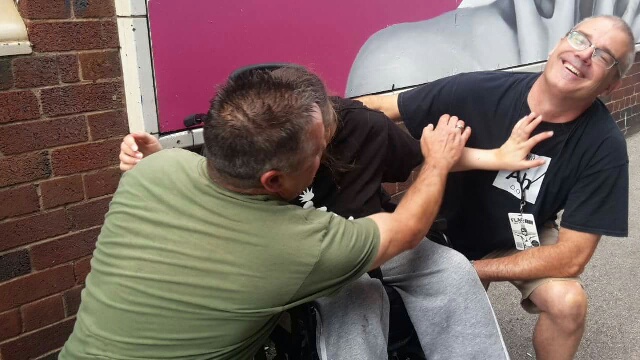 I also wanted to share some of the messages of support we’ve received. I amongst all the abuse there have been some really moving and thoughtful words of support. Thank you to everyone for taking the time to write, and here’s a selection of these here:

Paul, your response to the band member’s message to you brought tears to my eyes. Not often that happens. Keep up the good work.

I’ve just stumbled upon your campaign to get the Descendents to change their album title. As someone who grew up listening to the Descendents, I just wanted to say – good work! I don’t know if I entirely agree with your position but I applaud you opening up the debate  in this fashion – the punk scene has many, many problems, and engaging with these problems (sexism, racism, ableism) is the most ‘punk’ thing that can be done.

Thanks for your efforts with this campaign, and I look forward to seeing what comes of it.

All the best, Dann

I understand you’ve had considerable correspondence from people about this already, but I’ve only just become aware of Stay Up Late via The Louder Than War website. Firstly, I’m a big Descendents fan and I’ve already brought the new album – it’s too late for me to boycott it.

However, I fully support your call for the band to recondsider the name and for others to consider boycotting.

I work for an organisation that attempts to promote diversity, equal and fair treatment for all, challenging discrimination and harassment. As a result, I know full well what it’s like to be on the receiving end of some of the very base-level abuse you’ve received from fellow Descendents fans.

Your response (and Milo’s reply), is very well argued and very well phrased. It makes it very clear why you’ve called for the boycott and why the title is offensive.

I wish you the best of luck! Chris

‘Spaz’ in the USA

While running this campaign I’ve been doing some reading up to see how much the word ‘Spaz’ is offensive in the USA as it does appear that it’s a word that has become so common nobody even questions where it came from. I was then reminded of Shane Koyczan’s video from his To This Day Project

There’s links to other articles about ‘Spaz’ and disablist language at the end of this post.

Thank you Becky Boo, Milo, and Brian for bringing some sort of positive ending to this. I’m off on holiday for a couple of weeks so this has all come at a fantastic time for me, and hopefully we’ve all helped made people think a bit more about the language they use and how, even unintentionally, we can all contribute to marginalising people from our communities through our language, and our attitudes.

I also want to say a heartfelt thank you to Real Gone Rocks, the site who first wrote about this issue and also Skin Back Alley who also wrote a supportive article. There’s been lots of support from within our social care world but to get support from the mainstream music industry is just wonderful.

Thank you to Milo and The Descendents too for being so gracious and understanding in this whole issue.

1. They used to call me ‘Spaz’ – a personal story of bullying

2. Mental illness phrases you should banish from your vocabulary

3. Building disability literacy one brick at a time

4. Doing Social Justice: 10 Reasons to Give Up Ableist Language