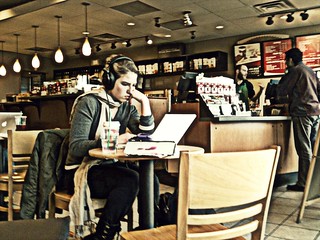 When we started the Gig Buddies project we were clear that we hadn’t claimed to re-invent traditional befriending schemes, we were just looking at using the hook of a shared interest in the same kind of music as a good platform for developing longer-term meaningful friendships between people with learning disabilities and volunteers.

As I talk at events though, and chat with colleagues in other organisations, I’m sensing that we’re not always comfortable with the term ‘be-friending’ and we’ve been thinking about why that may be.

A few years ago I was invited to go to the Secret Garden Party Festival, and never one to pass up a free ticket, I went. I enjoy my own company at times and so it was a great opportunity to not only experience the festival but to also have some down time, I treated it as almost like a retreat, albeit in quite crazy surroundings!

The thing was though after a while I was starting to crave talking with somebody and I would have really valued someone walking up to me and asking if I wanted to hangout and chat with them a while. And for me this is how I personally tended to view ‘befriending’. It’s a good thing but there’s an implied lop-sidedness to the relationship where the ‘befriender’ is doing something active and the ‘befriended’ is the passive, and grateful recipient.

It’s all about context though – if you saw me sitting on my own in a café in Brighton I’m probably working and wouldn’t welcome a well-meaning passer-by asking me if I was lonely and in need of some friendship.

Befriending schemes are great, and there’s loads of them doing fantastic work and they aren’t about a one-way friendship but to someone not familiar with them the term ‘befriending’ can imply this. From the start we’ve made it clear that Gig Buddies isn’t about a one-way relationship because the volunteer also gets a lot out of it. In our case they get to see their favourite bands, hang out with their buddy, share their interests, be part of a movement for social change, and also being valued as a volunteer who is part of something that really strengthens communities.

It was on the recent road-trip to the Glastonbury Festival where we pondering over these issues and we came up with our suggestion of Gig Buddies actually being about ‘purposeful friendship’.

For us this implies that its an equal relationship and one where both parties are getting something purposeful out of it. However, we also hope that whilst the friendship starts with a ‘purpose’ it will develop and blossom and the buddies will be able to drop the ‘purposeful’ part and just call themselves friends.

‘Purposeful friendship’ is still a bit of a mouthful though so we’re open to suggestions for coming up with something shorter.