Punk AGM #2 – looking back over the past year

We’re making plans for our next ‘Punk’ Annual General Meeting so we’ve been looking back at the ideas that came out of the last one and what we’ve achieved over the year (and also what we’ve not achieved).

We tried a new format last year, holding the AGM as an ‘Open Space’ forum. This meant we had a general theme about what we should be working on next as a charity and everyone present was asked to dream dreams and hold mini workshops to develop their ideas. All of these were presented back at the end of the meeting and followed-up on over the months that followed.

We knew we were probably not going to be able to make everything happen so we came up with our ‘Ideas Test’ to explain how all ideas would be considered, and how we arrive at a decision about which ones we’d aim to make happen.

The aim of the AGM was to create a more inclusive and accessible way for us to review our work and plan the way ahead. We also wanted to capture as many ideas as possible and use the concept of ‘co-production’ to ensure that our work meets the needs of the people we’re trying to serve, and that they are fully involved in all aspects of our work, from ideas through to delivery and review.

Looking back this approach has developed our work more than we could have imagined and we continue to challenge ourselves to ensure that people with learning disabilities and autism are fully engaged in how we run the charity. We know we’re not perfect but are always trying to improve what we do. 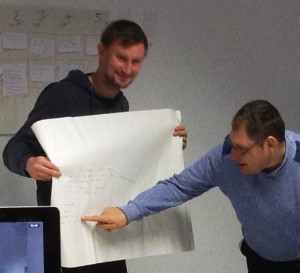 How can we have the most impact in the year ahead?

This was the question we asked everyone to think about and looking back ‘impact’ wasn’t the best word to use. We’ll learn from that. We should have said ‘how can we make the most difference for the most people’ or something like that.

We asked everyone to think about this question in relation to Gig Buddies and also creating a social movement for change around our Stay Up Late campaign work.

Everyone came up with ideas and then split in to mini-workshops to develop these in to plans to present back.

In this blog I’ve looked at all the ideas that came out and whether we achieved them, and what that looks like. If we’ve not made something happen I’ve also looked at that. 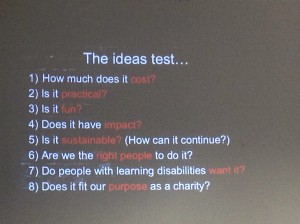 We considered ways in which we could support other organisations who are struggling with the issues around Staying Up Late. The idea was to create two practical commitments each year to raise awareness.

1) A ‘Social Media Heist’ – an online event linking lots of groups together to create awareness.

2) Finding good stories from around the country that show positive change.

We fundraised to try and make this happen and were delighted to receive funding from the Esmee Fairbairn foundation to make this happen. This meant I’ve been able to start working at the charity for 2 days a week to develop the campaign and we’ve created our pop-up campaign stand to help us find those great support staff who are able to work flexibly.

We’re not ready to do the ‘social media heist’ yet – but have made significant steps in moving the campaign forward and are also booked to speak at a number of Provider Forums to run workshops to think about how we can make positive changes. (We’ve also spoken at a number of conferences about the issue). 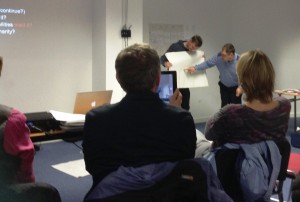 The idea was to run a creative workshop where we can pull the heads off toys and glue them back on to other toys and to make this a late night event it could be run in the park. There could also be pumpkin carving with Christmas hats and loud music to give it a party atmosphere.

In practice this hasn’t happened exactly as dreamed! Firstly there were some practical things we couldn’t work out how to do – how do you use glue guns and play loud music without power? (Thanks to our Glastonbury trip we’ve now discovered that you can get battery glue guns and have invested in a solar power system so we can play loud music too).

The Storm and Thunder team have continued to bring creative elements in to their meetings though and have done some awesome work over the year, and have also planned a variety of social meet-ups with the Gig Buddies.

And now there’s no reason why we can’t hack the heads off some toys and still make this happen!

Since we started the Gig Buddies we’ve been hearing loud and clear that people with learning disabilities really need a scheme that supports them to develop relationships. However, we’ve been so busy in making sure we set up Gig Buddies in a good quality way that we just weren’t in a place to have time to pick up on this idea. It’s a massive issue that needs a dedicated project, not a one-off night. 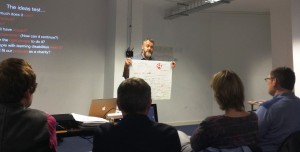 So we were totally thrilled when we heard that there’s a new organisation in Brighton and Hove called Heart Venture who are running a friendship and dating agency for people with learning disabilities. Not just that, they’ve moved in to the same office as us and we even ended up going to Malta with them on the ART-is project in June. So we’re working closely with them and excited about what might happen here.

We’re still working on our strategic plan, including our fundraising plan. However, we were thrilled to recently find out we’d got awarded £202,000 from the Big Lottery and earlier in the year were awarded £45,000 from Esmee Fairbairn for our campaigning work. These two funds mean we can start to concentrate our work and rely less on continually submitting smaller funding bids, an exhausting but necessary way of working for us we sough to build the charity and fund our work.

This doesn’t mean the fund-raising has stopped, far from it, but it does give us space to develop our strategy.

The challenge here was to ensure we put people with learning disabilities in leadership roles in the charity. When we started the charity we spent a lot of time making sure our governance and financial systems are good, and that we were creating the right working conditions for staff. This has been a difficult process at times and a lot of hard work. However, things are now set up and running well and we’ve felt like we’ve had much more capacity over the year to develop this part of our work. It was always a core aim of ours and it was good for us to be challenged in this way at the AGM. Some of the things we’ve made happen over the past year are:

– Recruited more people to the Storm and Thunder team which is now so busy we’re looking at setting up another one in a different area.

– Appointed Daniel, from the Storm and Thunder Team, to sit as a trustee on the main board.

– Making meetings more accessible by preparing notes in easier to read formats and asking participants to attend trustees meetings and give us feedback on how they found them.

– Inviting members of the Storm and Thunder Team to share their experiences of Staying Up Late (or not) at conferences and also lead on part of the volunteer training sessions.

– In early 2015 we received some funding which enabled us to employ two participants as office interns. This was a transformational experience for us and we aim to create more paid employment opportunities like this. (Always paying the real Living Wage too).

Things we haven’t yet achieved (but wanted to):

– Linking with other organisations like Speak out, England People First, the Learning Disability Alliance and Change to look at examples of organisations that lead by example in this area. We’ve not had a chance to do this just because of finding the time to do it.

We talked about those things that everyone thinks makes Gig Buddies such a good project, and how we would like it shared with other organisations.

We’ve spent a lot of time working on this over the past year and were extremely excited to be able to support ACL Disability Services in Australia to set up Gig Buddies Sydney. They’ve been an absolute pleasure to work with and we’re looking forward to setting up the second pilot on Midlothian with Thera Scotland.

The process of working with these two pilots has enabled us to shape our resources, develop our business plan and work out how we can best support more Gig Buddies projects to spring up around the country.

What’s held us back has been having the staff resources and time to do this but we’ve been slowly chipping away and will be publishing a prospectus for any organisations wanting to work with us on Gig Buddies in the next few months.

We’ve now got nearly 100 organisations saying they’d like to work with us so this is a potentially very exciting next step for us. For now here’s the blog on what we believe makes Gig Buddies special. 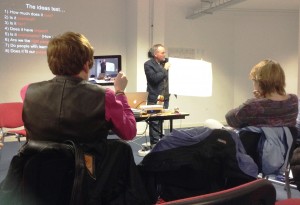 Some of our buddies are keen to get more involved in watching and playing sports. We run Gig Buddies in way that lets this happen naturally and we’ve also made approaches to Sussex County Cricket Club and Brighton and Hove Albion to try and develop links with them.

We did comment at the meeting that Brighton and Hove Albion never reply to any emails we send them but we’ll keep on trying.

The idea here was to see if we could work with a massive touring rock star and use their world tour as a catalyst for kicking of Gig Buddies in various places around the world. We’ve not made this happen yet!

The focus has really been on making sure we do a good job in Sussex and sharing Gig Buddies in Australia and Scotland – we’ve probably achieved more than we’d have dreamed of so we’re not going to beat ourselves up that this plan hasn’t happened.

Once we’ve got a sound funding position and a little more capacity in the charity we’re more than up for trying to make crazy ideas like this come true though.

We’ve achieved a huge amount in the last year, our team has grown from one part-time coordinator (Madeline) to a staff team of 3 with Kate and Holly joining both in a part-time capacity. We are truly lucky to have such a great team working on Gig Buddies, can’t really say that enough.

When we started as the Stay Up Late campaign we had a policy of freely sharing our logo and ideas as we wanted to have as much impact as possible, our aim is to make positive change happen. This approach has helped us to punch above our weight with Stay Up Late being really well known, despite being a tiny organisation.

There’s a sense that our work is making change happen but we’re also still challenging ourselves to do better though and we’re looking forward to our exciting next phase as we seek to get more people involved in Gig Buddies nationally (and internationally!)

Our next Punk AGM is on Saturday 24th Oct and everyone is welcome to attend. See the Event page here.

The theme will be ‘What are we going to do next?’

(oh and there’s a 20 mile night walk after this year’s AGM for anyone who fancies joining us in the ultimate Stay Up Late night!!)