This is the 3rd year running that we’ve been running our AGM as a ‘Punk AGM’ and we wouldn’t want it any other way at the moment.

(You can read more about last year’s meeting here)

It’s open to anyone and we had around 40 people who were participants, volunteers, trustees, people from other organisations and friends.

“What could WE do to make life for people with learning disabilities the most AMAZING it can be in the next 10 years ahead?” 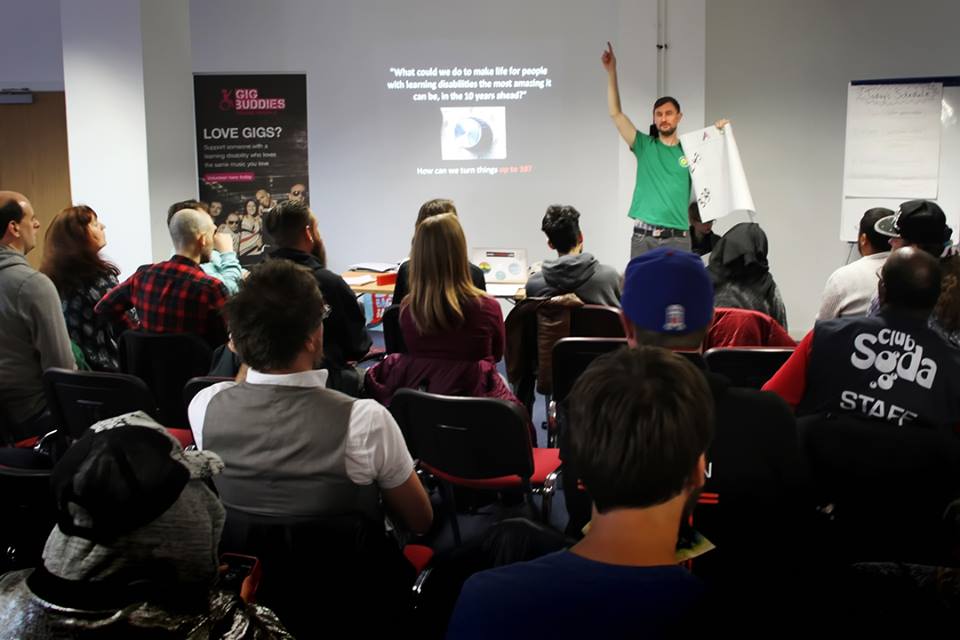 We then invited everyone present to come up with ideas and spent the afternoon working with them on developing these. There are just a few rules we work to when we’re running out meeting this way:

We got some great feedback about the whole day. Rami, gig buddy said “I enjoyed the AGM – lots of people came this time, I loved the idea of going around and coming up with ideas.”

And what ideas they were…

Daniels’ idea was to have an A to Z of events which could include things like:

(We’re certain that these are all ideas that the Storm and Thunder Team will be working on).

Daniel’s idea was to hold a sponsored bungee jumping event which also involved us dressing up in fancy dress and making a video of the occasion.

Andrew’s idea was that Gig Buddies opens up it’s own theme park. This would involve things like: 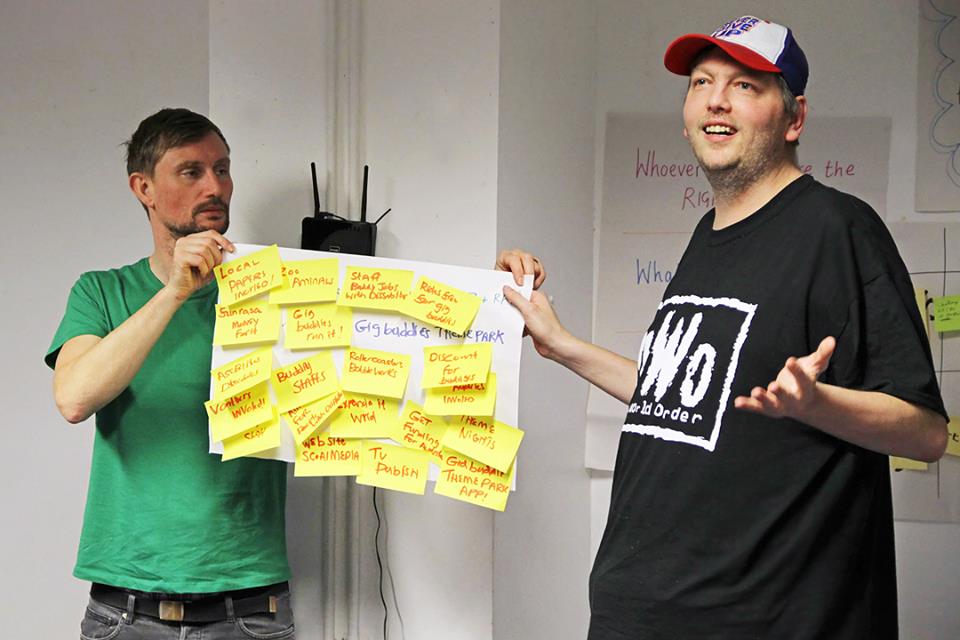 Andrew said, “Basically I thought of the theme park idea – we would get gig buddies staff to run it”. Rami commented, “We had lots of ideas about it but we’d need money – I think that a circus would be better.”

Which brings us to…

Rami’s idea was to have a whole range of different fundraising activities across the year. Things like:

This would be a good way to involve lots of volunteers and participants and share the work between lots of people raising small amounts.

This is idea was to have awareness training for venue staff delivered by people with learning disabilities.

A second part of this idea was confidence training for Gig Buddies. This could include: 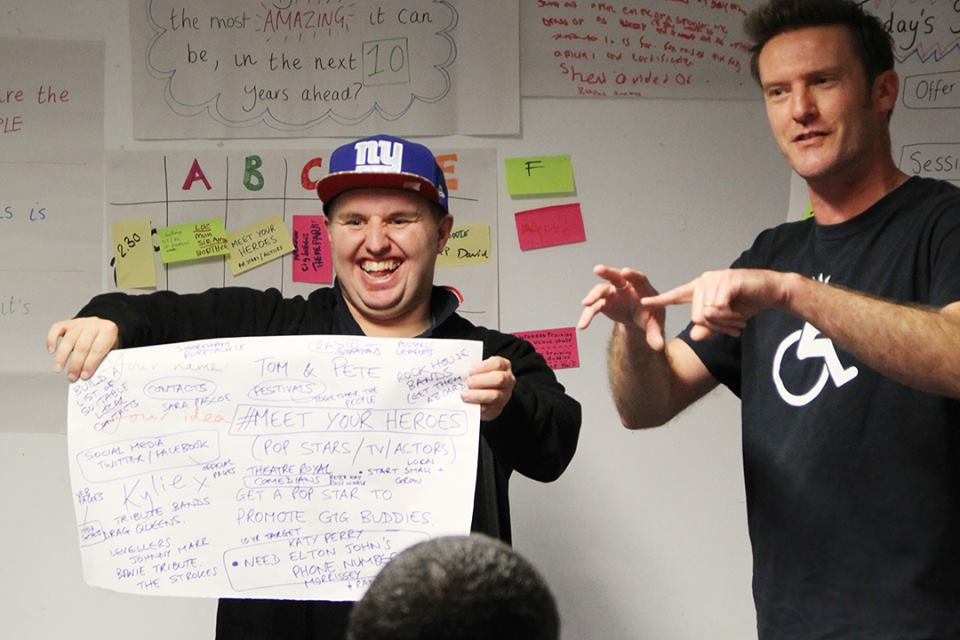 Tom and Pete’s idea was to get more celebrity involvement in our work by aiming to create opportunities for buddies to meet their heroes. These could be pop stars, TV stars and actors.

How to start this idea:

Sedley’s idea was to make sure staff working in the NHS have proper training to understand the needs of people with learning disabilities.

The problems people face are:

Ideas that came out:

Chris’ idea was a sponsored cycle ride with other Gig Buddies.

He’s even got a date – 8th April, meeting at 9am at the pier. The aim would be to cycle to Chichester (about 32 miles) along the national cycle path. (And it could be in fancy dress!)

Things that need to happen:

Chris said “I can’t wait for the cycle ride to we planned.”

Chris also thought it would be nice to find people who could pair up with participants who want to cycle.

If we get more volunteers through this we could approach other learning disability groups to find out if they have people who would like to have a cycle buddy.

Idea 9 – Getting the right ID (Luc the Hero) 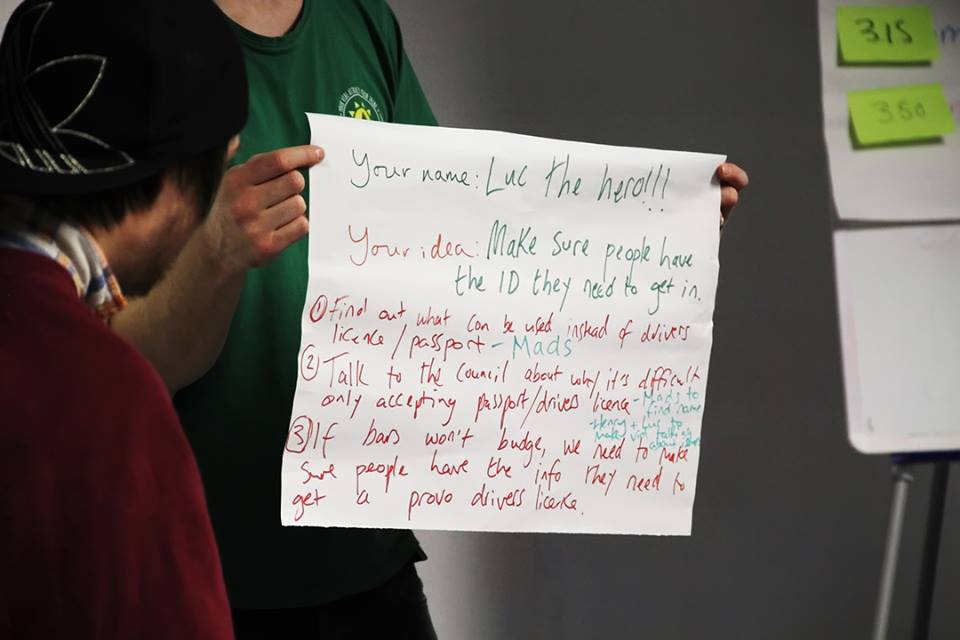 Luc’s idea was to make sure people have the right ID so they can get in to pubs and clubs.

It’s a real problem for people with learning disabilities, especially if they look quite young and don’t have a passport or provisional driving licence.

Pubs are careful because they don’t want to get in trouble from the police or the council, but it does mean people with learning disabilities are getting discriminated against.

Some things we can do now to take this idea forward:

David’s idea was to have an app to make it easier for buddies to share what they’ve been up to. It could feature things like:

Joy said she loves art and has a really great teacher. Her favourite artist is Matisse.

Joy said she’d like to have support to run sessions that show other people how much fun art is. She would like to partner up with someone so they can teach a group of people together.

These sessions would be for anyone who wants to learn about art and could be about painting, drawing, collaging, whatever people want to do.

Idea 12 – Making the charity much easier to read (Paul)

This year we decided that we were going to try and turn all of the charity’s policies in to an easier to read format, along with most (of not all) of our other information. It’s a big job but we want all information to be as accessible as possible.

Paul said the Stay Up Late website isn’t as accessible as it can be and his blogposts tend to be written for social care staff more than people with learning disabilities.

He wants to try creating video blogs to go with future articles to try and help make them more accessible, fun and engaging for people.

It’s always amazing to hear what ideas come out of our AGM and the energy and hubbub in the room is just fantastic. As always we’re keen to point out that we’re simply can’t take on all these ideas and make them happen. Some might be quite quick things we can have a try at, others may may turn in to other ideas, or link in to others. Others may simply be just too ambitious, but there could still be something in there that sets us thinking.

As always we will run all the ideas through our ‘ideas test’ to work out what may be the best ones for us.

When talking about all the amazing ideas that had come out of the day, Andrew said, “I think that what gig buddies really need to do is to expand wider.” Which is great feedback for us staff, we’re really excited about making new things happen, but also making gig buddies happen for new people! 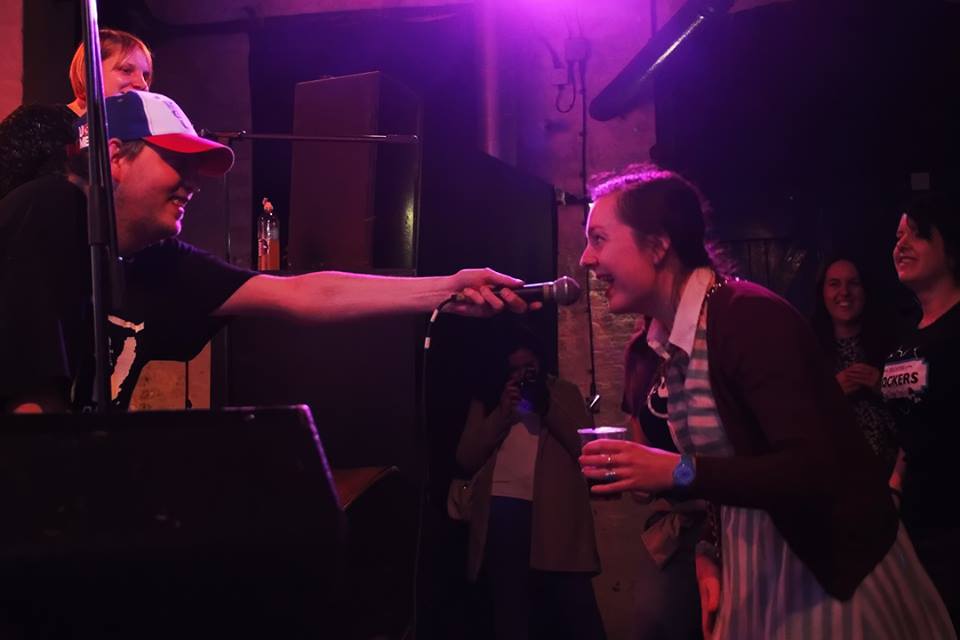 You can also read this post by Victoria and Kate. Victoria is our new Quality Checker and she’s written a lovely article with Kate about what she thought of the AGM, and the gig afterwards.

We’re looking forward to seeing how this all turns out as we start working what ideas to put in to action, and how we’re going to do that.