Brighton-based charity Stay Up Late who run the successful Gig Buddies project will be hosting another fundraising gig night at Komedia on Tuesday 12th November. A night of awesome live music featuring acts with and without learning disabilities, all profits will go to Stay Up Late, enabling people with learning disabilities to have active social lives.

Stay Up Late Director, Paul Richards, says: “We’ve got a brilliant line-up of bands and every penny raised will go to supporting the Gig Buddies project and our campaign work to give people with learning disabilities a voice about the kind of lifestyle they want to live. We’d like to thank all of the bands for taking part. It’s going to be another memorable night.”

“London quartet Italia 90 write brash and hard hitting post-punk with a distinctly British commentary. The sound on the ‘Italia 90 EP’, released earlier this year, cuts between the razor-sharp punk of Bristolians Idles, the harder, faster side of New Yorkers Parquet Courts, with the robotic rhythms of NEU!” Hard of Hearing Music

“If you’ve been to an Asbo Derek gig you’ll know what to expect. It’s sweary, mildly lairy and funny as f***. Their sound is classic garage punk rock and they have a lot of (important) message songs but all have great choruses to join in.” Brighton Source

2Decks is a rock/rap crossover band whose members all have some sort of learning disability. They were formed around vocalist Darren (2Decks) Peregrino-Brimah who has been producing his own hip-hop tunes for over ten years before pulling together a team of musicians to aid him on his quest for world domination.

The night will also see the official launch of the charity’s #NoBedtimes campaign, with participants donning their pyjamas as they fight for the right to party and campaign against outmoded institutionalised practices that prevent people with learning disabilities having the kind of social life they want to lead. 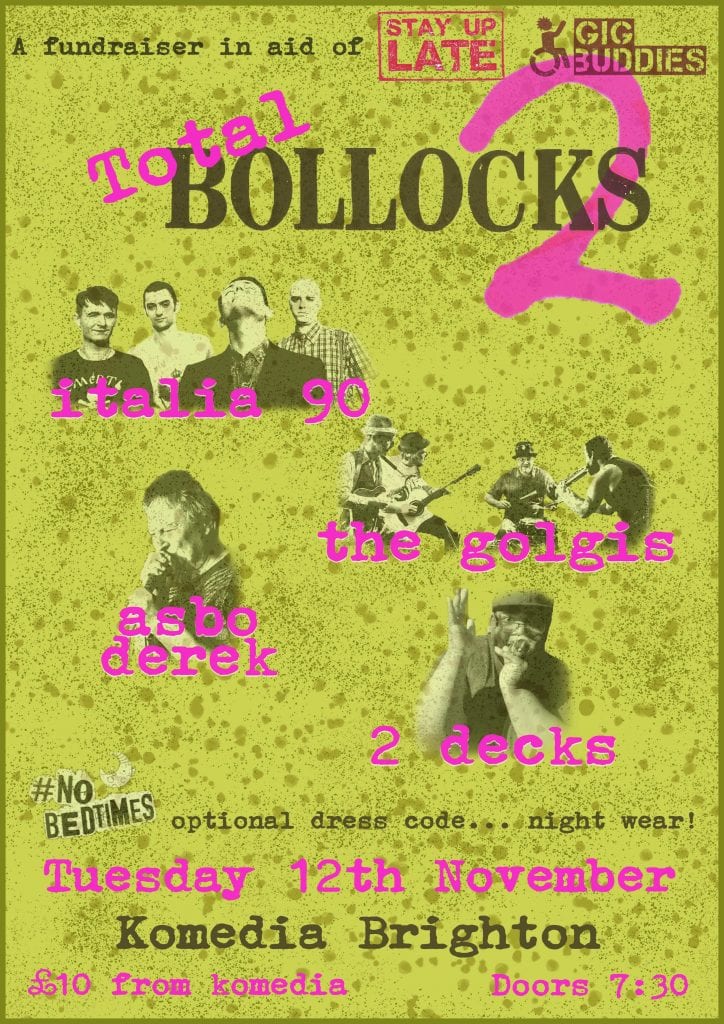