While there has been no shortage of conferences for social care professionals discussing support for adults with learning disabilities, the (un) Ordinary conference taking place in London on 26th March will be one with a difference. The majority of the delegates will be composed of those working in commissioning teams, local authorities, the NHS and supported housing but all of those on the platform making speeches will be people with a learning disability.

The event is being hosted by Stay Up Late – the Brighton-based charity who pioneered the successful Gig Buddies project and who campaign for people with learning disabilities to have control and choices over the way they live their lives.

Covering three key themes – communities, relationships and work – the conference will explore the barriers that adults with learning disabilities typically have to overcome to do the things that most of us take for granted.

Contemplating lessons that may be taken away from the conference, Paul adds: “The big question for those in the room will be how can we go about commissioning support services that enable people with learning disabilities to lead ordinary lives, whether that be having an active social life, a relationship or a paid job? We’ll hear what an ‘Ordinary Life’ means to real people, and for those people in a position of power to be able to go back to their places of work and be inspired, enraged, shamed, or just nudged at a little, to enable people with learning disabilities to be able to lead an ‘ordinary life’ – not special, not normal, just ordinary!”

Among those speaking will be 25 year-old Ben from London. When he was younger lots of things used to get on his nerves but on the school bus there were two Jamaican guys who used to play him Jamaican music on the way home. Now he’s a hugely knowledgeable and well-known figure in the Bashment music scene. Another speaker will be Phillip who had been in a relationship with Alison for several years. They wanted to get married but it was only with a change in support staff that their dreams were taken seriously. Phillip and Alison have been happily married for five years now. These and others will be sharing their stories at the (un) Ordinary Conference on 26th March. 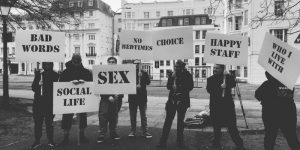 Due to high demand delegate tickets are now sold out.