Over 130 people packed out the Streatham Space Project’s stunning new arts venue in south London for the (un)Ordinary Conference. Hosted by the Brighton-based charity Stay Up Late, this was a learning disabilities conference with a difference. While professionals from the social care sector made up much of the audience all of those on the platform giving speeches, presenting films, hosting Q and A sessions or leading discussion groups had a learning disability and/or autism.

Stay Up Late Director, Paul Richards, said: “We see lots of conferences about people with learning disabilities but precious few speakers who actually have a learning disability. Stay Up Late sought to challenge that and to pioneer a new kind of conference, not by being negative but by enabling people to share their positive stories. We had an amazing array of speakers from a really diverse range of backgrounds sharing their stories about the institutional barriers they have had to overcome and the battles they have had to fight to live the kind of life they want to lead. We hope this conference acts as a wake-up call to all kinds of organisations about the need to start listening to people with learning disabilities, not just making assumptions about what they think is best for them.”

There were three key strands to the conference: Communities, Relationships and Work. In the session on communities the conference heard from Ben Adams who went from being an isolated and often angry teenager to becoming a respected and knowledgeable figure on the Jamaican Bashment music scene. The relationships session included a presentation from Laura Small who spoke as the mother of a ten-year old son and how it meant the world to her. The third strand on work included a presentation from Scott Watkin and Grace McGill. Scott Watkin who was once told he would “never get a job, never have a family and never live independently” on account of his learning disability. Scott was awarded a British Empire Medal in 2017 and his many professional achievements include arranging an internship for Grace at the Bank of England.

The conference was held together by sharply perceptive and hilariously witty Tilley Millburn and Del the pig from Heart n Soul, the award-winning creative arts company that works to unleash the creativity and talent of people with learning disabilities.

Stay Up Late is hugely grateful to its sponsors for the day’s event: Open Future Learning, Choice Support, Leigh Day and the Esmée Fairbairn Foundation as well as all the organisations and individuals who contributed in making the day a success. 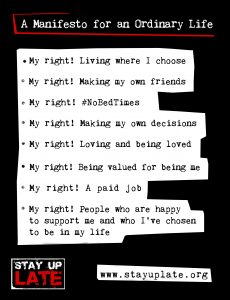