Paddy Power Tweet ‘Mong’ and “didn’t know what it meant”

A few weeks ago we got involved in a storm with fans of the band Descendents over us and RealGoneRocks objecting to the band’s new album, and EP, containing the word ‘Spaz’. The dust is starting to settle on this issue now, and then band have at least apologised for clearly not knowing what the word meant in the UK. Yesterday we then noticed a Tweet from the multi-million betting company Paddy Power which used the word Mong for some sort of misguided humorous effect. 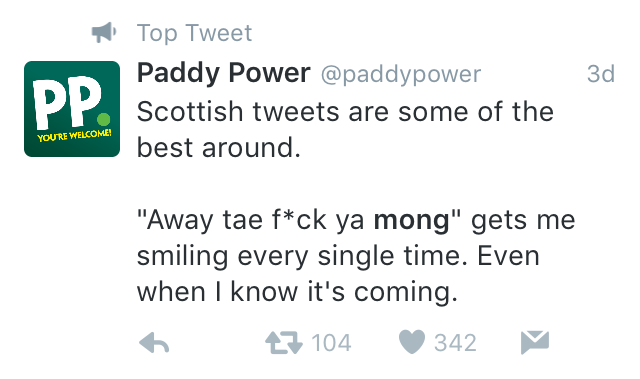 As soon as we reacted to their Tweet it didn’t take them long to reply with an email saying that the person who wrote it was mortified and didn’t know what it meant. Are you seeing a connection here?

The individual who sent the tweet was not aware of the word’s meaning and is mortified now. The tweet has obviously been deleted.

We apologise for the offence caused and can assure you that the objective of our Twitter account is always to entertain, not to offend.

Also, you mentioned our association with The Special Olympics in your original mail below – we are also supporters of other disabled sports such as the Irish Amputee Football Team and The Irish Wheelchair Rugby team, and have partnered with Down Syndrome Ireland on many occasions.

1. The person who wrote it didn’t know what it meant.

So a multi-million pound organisation, famous for it’s edgy and controversial social media presence manages to hire someone who doesn’t know that the word ‘Mong’ is an offensive and cruel term in the UK for people with Down Syndrome and has been for decades. (Maybe they’ve not heard of Ricky Gervais either).

2. They are mortified now.

I can imagine they well are, whether they knew what the word meant and have been shown to demonstrate a catastrophic lack of judgement, or that they’ve been living with their head in side a bin for the past 4 decades and never heard this word used at school, and genuinely didn’t know.

3. They apologise for the offence.

It’s nice they’ve done this and not used the typically ‘any offence’ line. BUT the point is that this was published and wasn’t deleted before at least 104 ReTweets and 342 Likes. 104 people thought this was such a great Tweet that they shared it with their followers, and 342 ‘liked it’.
So in many ways the damage has already been done.
What Paddy Power should have done is immediately put a statement out on Twitter saying they were appalled at their insensitivity at using words like #Mong which can contribute to disability hate crime.
Instead there are at least 342 people out there who think the use of the word #Mong is acceptable, and funny.

I’ve had a lot of emails, Tweets and Facebook comments to this effect over the past few weeks. Then this week I read this blogpost from Dr Chris Whitaker where a member of staff at the Cambridge Folk Festival referred to him and his partner as ‘Window Lickers’.
When I’ve spoken to people I know about this there have been two main responses.

It doesn’t take long though before a little bit Googling shows you how prominent people have used this word. Disappointingly there’s Aphex Twin’s 1999 record, and also people like Jeremy Clarkson using the term on Top Gear and in his blog posts. (These are still published on the Sunday Times and Top Gear websites.

I also saw this Tweet from a professional Call of Duty player called Faze Blazigen with over 2Million Youtube subscribers, and so far 1,200 of his followers have Re-Tweeted and ensorsed his use of the word #Retard.

Most common words used on a daily basis at the FaZe House:

A number of Descendents fans defended them by saying that they wouldn’t have intended to hurt anyone, and I don’t dispute that. However, a good number of their fans attacked me with some pretty vile messages showing that they hadn’t picked up on this subtlety. Whether Paddy Power, Descendents, Aphex Twin, Ricky Gervais, Jeremy Clarkson or Faze Blaziken mean to harm people is only known to them. The point is though that whether they mean it or not they still harm people because collectively they have millions of fans who don’t question these words or the effect they have.
This then creates cultures and communities where these words become common place and the people affected are further marginalised, bullied and hurt.

These people and organisations all have a position of privilege which they could use to help create positive and inclusive communities where everyone feels loved. Or they can use these words to make money and feather their own nests.

What can we do about it?

If we say nothing we just let this situation fester, the words become more and more common place until, like in the USA, they’ve actually forgotten what Spaz actually means.

The final paragraph in Paddy Power’s email is very telling to me. They seem very proud of the charitable work that they do but at the same time potentially cause great harm through their Twitter feed. 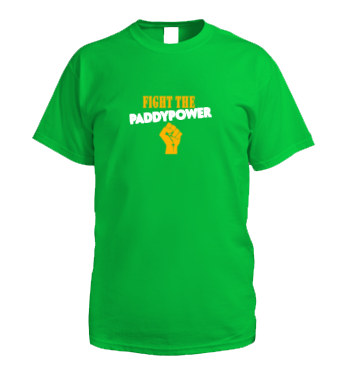 So Paddy you have the Power, do some good with it, not so that it makes you look good, but so it actually does some good.

Let’s have that Tweet that truly condemns what you did and makes a proper public apology. Say what you did, and why it was wrong.