Oh wow! Me on TV! Daniel’s blog about Gig Buddies on The One Show

Gig Buddies featured on BBC’s The One Show

Daniel Randall-Nason talks about his experience of featuring on The One Show alongside his gig buddy, Darren

I felt really lucky to be asked by the BBC to appear on The One Show to talk about Gig Buddies. In my blog I’m going to talk about the magic of doing it and also why it’s so important to get the message out there.

When I was first asked I thought wow! Me on TV! Wow! Let’s party!

I wasn’t nervous about going on TV but I did want to plan and be well-prepared. 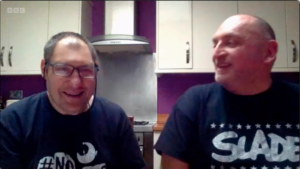 I did a little bit of preparation beforehand with Darren. I also made some notes so I would remember my favourite highlights – going to shows and going to gigs and all the magical experiences.

When I was doing the interview I thought wow! Barney, the presenter, and Anna, the assistant, were so friendly and helpful. Barney laughed so much he said we should have our own comedy slot every week. But not a cookery programme though. He didn’t trust us to do our own cookery show after we told him about cooking chips on the barbeque.

We had a lot of fun doing it but it’s also really important to get the message out there. We want people to know that just because we have a learning disability we don’t want to be tucked up in bed at 9pm. We want to be out having fun. We don’t want to go home early when we go to a gig. We want to stay to the end and have fun. That’s what Gig Buddies is all about!