The Channel 4 News have recently been running a series of short documentaries called ‘No Go Britain’ investigating what life is like for people with disabilities living in the UK today. This was set against the lead up to the Paralympic Games and all the feel good vibes that were being created around this.

We were really pleased to be invited to take part in this and a team from Channel 4 joined us at the Together The People Festival in Brighton to talk to Gig Buddies, Andrew, Berhana and Harry about their experiences and why it’s important to be able to choose what time you go to bed, and how you lead your life.

The reporter, Jacqui, is a young woman who is also a spoken word artist but finds it really hard to perform because her ‘care’ agency insist on her having an 8.30pm bedtime! That’s an improvement on the original 7pm that Jacqui fought against. Perhaps we should call these sort of organisations ‘Don’t Care Agencies’ instead?

Channel 4’s coverage in the lead up to the Paralympic Games showed adverts of inspiring people with disabilities performing superhuman feats in an attempt to change our perceptions of what it’s possible for a disabled person to achieve.

The problem is we know it’s actually incredibly hard for a person who needs to support to just go down the pub for a few beers with their mates. So it was great to see Channel 4 were able to challenge themselves around this and staged a live debate looking at the day to day issues facing people with disabilities in the UK today. We were also delighted that Gig Buddy Andrew Walker was invited to be part of the live studio audience.

The No Go Britain debate wasn’t an easy thing to watch. In the introduction we heard that 1 in 3 disabled young people in the UK say they’ve experienced discrimination, and how practical things are just not available – accessible toilets, public transport, and of course not having support that’s set up to support you to go out when you want to.

Sitting on the panel were Robert Halfon MP and David Pearson from the Association of Directors of Adult Social Services. Robert Halfon seemed to be keen to talk about some of the structural issues in the way the environment is built, inaccessible toilets and parking spaces, but David Pearson quite eloquently pointed out that whilst we’ve had 20 years of there being an agenda around personalisation we’ve also had 6 years of austerity, with needs rising and the Government’s spending priorities being focussed elsewhere than social care. He pointed out that 2% of our income as a nation is spent on social care, and that figure is falling.

This Government’s own law, The Care Act, is itself being challenged by cuts to local authority budgets. In theory the Care Act is a great thing and should put people in receipt of support at the very centre of saying what they need. But that’s going to be hard to achieve if local authority funding keeps getting cut. David pointed out that this has been £4.6bn over the past year (a 31% reduction). And here we have Jacqui and young artist – a grown up – pleading for flexibility, and her ‘care’ agency dictating her bedtime!

There’s a lot of problems

It didn’t take for very long for passions to rise in the audience and we heard an emotional account from a woman who spoke about a violent assault in a night club, an unprovoked attack on her because of her disability.

The personal stories of the impact of austerity cuts and the de-humanising assessments that people have been put through to claim their Employment Support Allowance.

Public transport that isn’t accessible to the public.

“We need a caring society built on trust”

How the ending of the Independent Living Fund has not brought about a new dawn of people living even more independently but has seen people who aren’t incontinent forced to wear an incontinence pad due to lack of support. A strange definition of independence!

GP appointment times of 10 minutes that don’t enable people with autism and learning disabilities to fully explain themselves.

Experiences of discrimination when people with disabilities were trying to access employment.

It was fantastic to see Gary Bourlet was in the audience too and he spoke passionately against demoralising assessments and a need for a caring society based on trust.

What was also painful to watch in all this was Robert Halfon MP attempting to use statistics to claim that the government had improved the lives of people with disabilities when there were so many passionate people, with lived experience, emotionally stating the opposite. 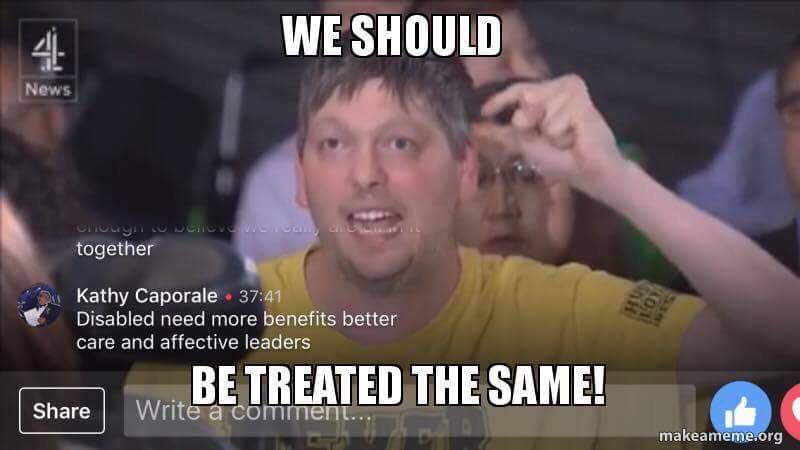 It was wonderful to see Andrew Walker, always a passionate advocate for the rights of people with learning disabilities, speak up and articulate what it’s all about:

“Going to bed early, it’s wrong. People with learning disabilities should be able to stay up late as long as they want. Support workers are not giving them a chance.

At the end of the day people with learning disabilities are no different to anyone else. We should be treated the same!”

A passionate, heartfelt and urgent call to action.

How can we change things?

David Pearson summed it up well as there’s not one answer to this. We need to change cultures in communities at a local level so new buildings are designed accessibly and fear and resentment is not spread through the media about people with disabilities, leading to hate crime.

We need to be listening to what people with disabilities want so we can all be part of helping them to fulfil their aspirations.

But we do also need an adequately funded social care system.