Nadine Dorries MP and the art of not saying sorry

I wasn’t planning on writing anything this week. I’m still recovering from what was the best Annual General Meeting we’ve ever had. An afternoon of discussions and ideas followed by a wonderful night of punk chaos at a packed Green Door Store in Brighton. (I’ll write up what happened when I’ve had a bit of time to read everything.) I had to write though because yesterday I was made aware of a tweet by Nadine Dorries MP for Mid-Bedfordshire which read: 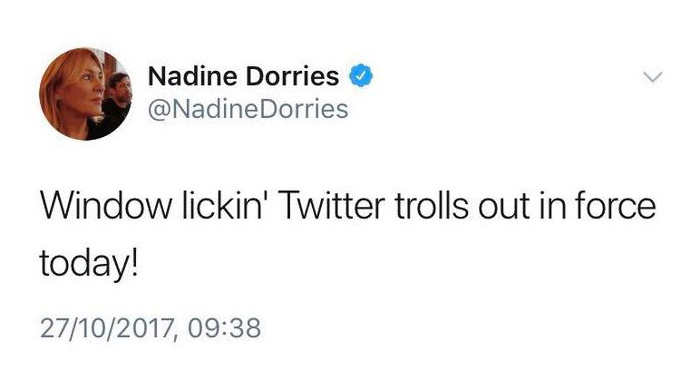 I have no idea what the context of this tweet was but there can be no way in which you could claim to use Window Licker in a nice way (and I say that as a fan of Aphex Twin’s music, but still can’t bring myself to own or listen to the record of that name either).

Nadine obviously loves to be in the public eye and has 34,200 followers on Twitter. It wasn’t long before outraged people contacted her to point out what a derogatory and vile term ‘Window Licker’ is. Her response was to claim she was using ‘the other meaning’ (whatever that might be). Then she of course blocked me, not for saying anything abusive, just because I was critical of an elected member of the UK’s parliament. (She’s also blocked a fair few other people who gave her measured criticism).

Sorry seems to be the hardest word

In directing our charity a key value of mine is trying to act with humility. In our work we’re never going to always get things right, or sometimes we may use poorly chosen words. If this ever happens it’s our responsibility to hold our hands up, apologise and learn. This approach also underpins our Complaints Policy as well as our general attitude towards our work.

All to often in the media these days though we’ll hear ‘apologies’ along the lines of:

“Sorry if I caused any offence” or in Nadine’s case “I didn’t realise it was a hateful word”.

That doesn’t wash though – a true apology would just be “I am so sorry for using an appalling word. I’ll learn from this and do better in future”.

Instead Nadine’s refusal to apologise just perpetuates the use of hateful words such as ‘Window Licker’.

We need to take action

If Nadine won’t apologise we really ought to take action to force her to apoligise, and send a message to all her 34,200 Twitter followers that it isn’t ok to pollute peoples’ minds with such vile and disgusting words, which in turn creates the conditions where people with learning disabilities are further marginalised, and de-humanised.

Nadine Dorries MP really ought to be making profuse apologies to the people that she represents. Some of her constituents may even be people with learning disabilities who voted for her.

What you can do

We’ve started an online petition calling for Sir Patrick McLoughlin, the Chair of the Conservative Party, to insist that Nadine Dorries MP shows humility, makes a proper public apology, and sends out a loud message that it is not ok to use words like this, even in ignorance.

If it was in ignorance it’s still caused damage.

Please take a minute to sign the petition and send a message to Nadine Dorries MP that hate speech is never ok, whether through intention or ignorance.