Minutes from meeting on 21st April 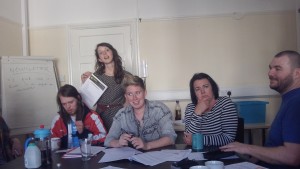 Listen and speak one at a time – Remi and Claire

Berhana – went to a gig at Green door, it was good, dancing. She saw three bands. Her and her buddy were the only ones dancing, moving like Jagger

Rami – went to spain in november with stay up late. He said it was amazng and he had a good time.

Claire – Went to London by trian and underground. Interview in newsletter. It was really good. 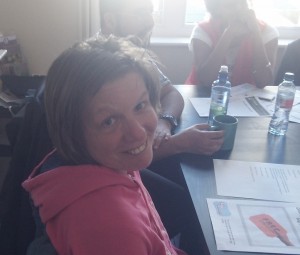 Jamie – Had a haircut. Kiss from a disco at Bexhill, he might be going to that. Also him and David are going to a radio station with Nick from kiss from a disco, for shut up and listen. Weather discussion. Going to diving 8th May at Olympic pool.

Kate – went to a gig last night, went to see Of Montreal, free tickets through one inch badge, on guestlist.

Bernie – Hasn’t heard from buddy for nearly 3 months. Still going out to town regularly though. Wanted him to sing at a kareoke because he looks like Elton.

Harry – In a band, has a manager – Sam. Writing own songs, band in Eastbourne. Name: Delta 7. Going Spain. Doing table tennis in Sweden. Seen Chelsea play with Sam and now he’s going to see them again in May.

Madeline (said when she enters) – works in different office. Heard her funeral speech a few days ago by Harry.

David introduces idea to everyone

Rami – He’s only had one photo with his gig buddy

Berhana – just use your phones and take a selfie

Harry is meeting Sam in town this Friday around half twelve. (it’s a city) 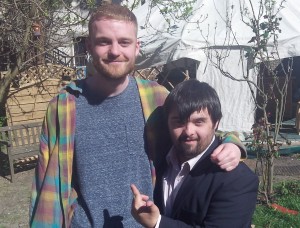 Berhana is going to follow people around to sort out the video.

Everyone got one through their door

Rami likes it, offers his help since he’s done a newletter before.

Jamie is going to be in the children‘s parade on the 2nd of May.

David talks about what’s coming up, gig in Worthing. Gig in Bexhill. English disco lovers in May, clubbing at a temporary venue in Brighton due to the Fringe festival. Meet up in Eastbourne. Also, a Eurovision song contest in Brighton.

Claire talks about her trip to London, where she when with her gig buddy to a show called Once. It was about a girl and a boy, she got there by train and underground. Ronan Keating was in the show. She would go and see the show again. Remi has seen the film version of Once.

David read out his review about Funeral for a Friend which can be found in the newsletter.

How to get free tickets

Leaflet is handed out which Harry reads out.

Rami says about the Brighton Fringe having a lot of events on.

Kate explained what it is and said it wasnt compulsory.

Berhana said she wouldnt want to do it on a night out.

You can rate the venue and the staff and website.

Discussed how sometimes the staff can be difficult and it would be good to be able to rate them and let other people know where the best staff are.

Discussed why the form would be good: rami – it would be good to know about the place and whther it is accessible. And talked about the disabled toilet being accesible to those who need it.

Kate – Then we can recommend gig buddies nights out to the venues that scored really high.

Kate described what the thumbs up pledge is. More patient and treat people with disabilities better.

Discussed whether the instructions to the offices were good. It seemed like they were – everybody got here!

Kate talked through the venue mystery shopper venue. If you fill it out you get to go to a free gig. 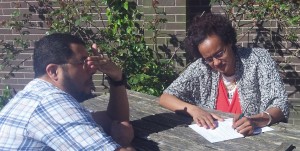 Berhana is going to interview Remi about a gig he went to.

Video of Harry and Sam looking at fringe leaflet for What is Gig Buddies film.