May Storm and Thunder meeting – with special guests 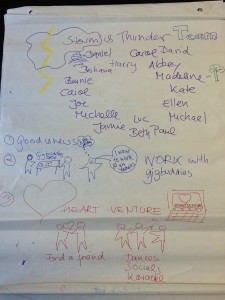 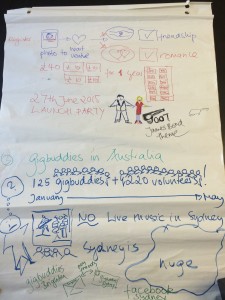 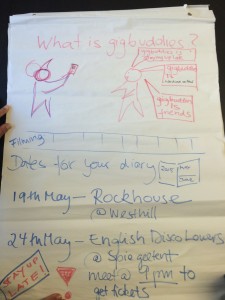 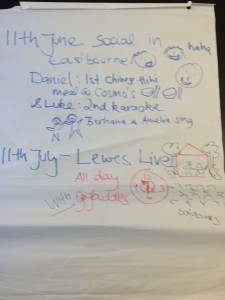 Madeline: lets do a group agreement. Listening is important

Michelle: No mobile phones, or turn phones off

Carol: Also from sydney, been brighton quite a few times. They’re starting gig buddies up in sydney.

Harry: been to Sweden, to play table tennis. Winner

Daniel: Going on a cruise for two weeks to the caribean.

David: this morning had an interview at BBC sussex and he is in Kerrang! Magazine. 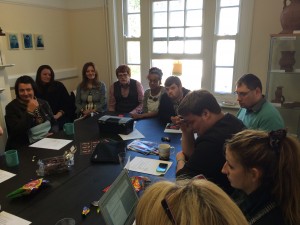 Carol: only moved in last week and starting up Heart Venture.

Cornelia: Here to take notes. Her son is in Kerrang! And she’s excited about PKN. 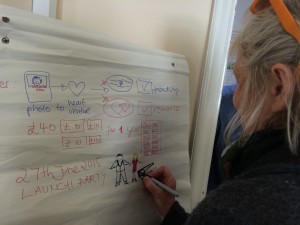 Micheal: Used to play for Heavy Load. Trying to make a comeback.

Paul: book coming out on monday which him and micheal are in. Wrote by Alice Fox.

Ellen: went to see ladyboys last night, got a picture taken on stage with gig buddy.

Harry getting a job in the office, newsletter mass day.

Jamie is negotiating getting paid – not working.

Carol introduces it: it is a dating agency for adults with learning disabilities. It is online and has been recently launched. You have to fill in an application and give a reference of a social worker/carer. And they invite you in to discuss what you want and preference. Not just for girlfriend/boyfriend but also to make friends. Started it because of her son Danial was on the undatables. Every month they have an event. Next one is in the casino and its going to be very posh.

Daniel: does it matter if he is in Hastings?

Carol: Only applicants from birghton, hove, shoreham and worthing. But trying to expand further a field. But don’t stop from coming to events if outside of the catchment area. They do karaoke, line dancing and all sorts of fun things. passes fliers around. You can go online once you get given a number and you can see who is on there, and if you want to befriend them you press one button, if you want romance you press another. If they say they want to meet you then it goes through the company and you meet with a chaperone. They’re going to be on Channel 4 now.

£40 a year to become a member, events are cheap for members, and members get priority if events have a limited number of tickets.

Been in the UK for 2 weeks. They had a launch bac in Feb with bands and politicians. Carol met Paul 2 years ago. Then she met Andrew. In sydney there is a organisations called Live music matters. They had a bit about disabilities, and including them. So she wrote a submission and they talked about it and they got mony to start things up. She said in the first year they’d have 30 volunteers and maybe 20-25 gig buddies. However, from feb to april, 220 volunteers, 130 gig buddies. They have a co-ordinator called Shaun, he is the equivalent of Madeline, he has just started training the volunteers and meetings with gig buddies, they’re in the process of the first meetings and matchings. One thing in Sydney they have to do is go and talk to the venues, and say this is what we like to do and can we have live music. 11% of venues in Sydney have live music. They want to reintroduce live music in Sydney. Another difference is Sydney is a huge city, its bigger than London, there are less people who live further away from each other so it is wuite a job trying to met everyone. A suburb in Sydney could be from Brighton to Southampton. A lot of city’s in Australia would like it as well, so they are thinking of in the future talking to different councils and setting it up all over Australia. It’s starting off small but hopefully it can expand into something massive

Carol: We’re limited by our imagination

Afterwards we go outside to work on ‘What is Gig Buddies‘ film.