Jay and Bradley, buddies of 3 years – our Hip-Hop duo! 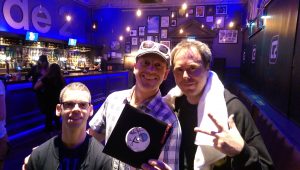 (Jay, Bradley and The Cut Chemist at Concorde 2)

Me & Bradley have been Gig Buddies for 3 years now. It’s something we both really enjoy and I think works for both of us.

We mainly like going to Hip Hop gigs in Brighton and have seen some really cool acts. Last year we saw Krafty Kutz and Chali 2 Na, Slick Rick, Ghost Face Killa from the Wu Tang Clan, The Cut Chemist and one of my all time hero’s – DJ Jazzy Jeff out of The Fresh Prince of Bel Air! Coming up we’ve got Grand Master Flash to look forward to, a true hip hop pioneer and another one of my heroes.

Gig Buddies works well for me because otherwise I wouldn’t have anyone to go and watch hip hop gigs with as most of my friends aren’t really interested in that kind of music. It means I’m way more motivated to get off my backside to go and see stuff because I know that I can get in touch with Bradley and we can both have a bit of a night out. As a result it means that both us get to go to loads more cool gigs than we would do otherwise.

Being Bradley’s Gig Buddy means that he’s introduced me to other music nights out that I would never have known about such as the Brighton Rock House. Its also introduced both of us to new music we might not of heard of such as when we went to see Mik Artistic at a Stay Up Late fundraiser. Neither of us had heard of Mik Artistic but we had a brilliant time and in fact we’ve seen him twice now.

On top of the fact that we get to do all this cool stuff, the general community surrounding Stay Up Late and Gig Buddies is a really awesome thing to be a part of with loads of great people. I definitely feel like I’ve made a bunch of new friends since I started and hope to stay part of it for as long as I can.

I love it and get to see friends that I have known before and make new friends as well.

Jay is a nice guy and I am happy to see hip hop gigs with him.