Stay Up Late’s (un)Ordinary conference in London on March 26th is a conference with a difference. While the majority of those in the audience will be professionals working in the social care sector, all of those giving speeches, leading workshops or making presentations will have a learning disability.

In the run-up to the conference we’ll be introducing a number of our speakers. Today we say hello to Phil Dyer who will be speaking in our session on relationships. 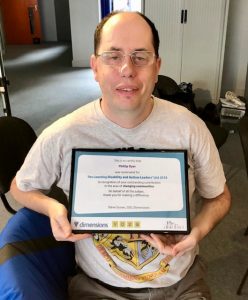 “I am a 42-year-old man who lived with his parents for 35 years. I met Alison in 1989 at a day service we both attended. We became a couple in 2005. We decided to get engaged in 2007. We always wanted to marry but no one really took us seriously or acted on our wishes. My parents where fine with it as were Ali’s mum and dad but nothing happened. I went and stayed weekend and we where determined to be together. It was only when I got my current support staff that things started to happen and with their support we married in 2014. Too many people feel they need a carer’s approval before anything can happen. I believe it is up to the two people involved to decide what they want to do and they shouldn’t have to push for what is a normal thing for many other people.”