Hatespeech gig from P.B.P, The Punker Bunker and The Pipeline Brighton

We’ve now heard from the band and they have apologised and changed their name. Which is wonderful and that’s a great outcome for everyone.

Sadly it’s also led to a lot of unpleasantness on Facebook from their fans which is similar to the abuse we got from The Descendants fans a few years ago – but interestingly in both cases the bands were both lovely and accepted that they’d made a mistake and not intended any harm.

Some of their fans accused us of just trying to get some free publicity. Believe me, stuff like this just takes up time and dealing with abusive band fans is tiring and stressful, there’s much better ways I can think of for generating publicity. The real reason I was slow to write an update is that I was just too busy with other work around the charity.

So thank you to the band for being so understanding and just a shame that a small number of their fans were so angered by it all and seemed to totally miss the point of why we were raising the issue. Instead of debating with them online I’ve invited them to have a cup of tea and chat about it more, I’m sure they’re nicer in real life than they are on Facebook.

Over and out for the weekend

It’s recently come to our attention that a local promoter P.B.P (run out of the Punker Bunker record shop) in Brighton is staging a night in town featuring a the band The Asbo Retards. We’re deeply appalled by this.

As a charity we believe that language is hugely important to influencing the way people regard each other and the word ‘retard’ is known to be a contributor to hate crime, both as a term of abuse but also in the way that it de-humanises people with learning disabilities and others them.

We’re also grateful to Sally at The Hope and Ruin who made us aware of this. She was equally appalled and had prevented the night from happening at her venue.

It’s likely that the band, the promoter and the new venue aren’t aware of this and probably think it’s just about being edgy punks. That may be but it needs addressing. We are no longer living in 1977! 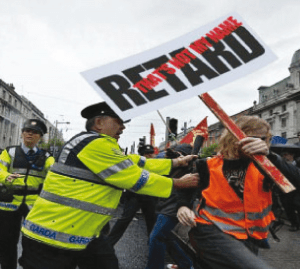 Sadly the gig has been rescheduled at another local venue, The Pipeline, and we are asking them to re-consider.

The purpose of our charity is enable people with learning disabilities to feel welcome in their communities and not at risk. If they were to walk past that venue, or see an advert for that gig online, it would no doubt more likely cause alarm, fear and sadness.

We can’t obviously tell bands what to call themselves to book by having the word ‘Retard’ advertised is not a good look for any business.

The last thing we want to do is create any bad feeling or publicity for local venues or for the Punker Bunker.

Live music venues and independent record shops are a precious thing but we also need to stand true to our values.