“Sydney are you ready?
I SAID SYDNEY ARE YOU READY!”

I think the idea behind Staying Up Late is that it’s probably wise to try and get a good nights sleep and not get up too early the next day. Unfortunately we’ve not quite nailed that part of it right now and after another great day, and late night, Paul was up at 6am to do a live interview on ABC’s Triple J program.

Triple J is a cool, iconic youth culture show, which has the coverage and audience demographic of BBC’s Radio 1 but plays music more like you’d hear on 6 Music. Paul likes to think this now makes him cool.

The show goes out across the whole of Australia and already by the end of the day we’d had enquiries from Brisbane, Perth, Melbourne and Adelaide all wanting to get on board.

ACL also received this lovely letter from the Deputy Leader of the Opposition, Tanya Plibegsek:

One of the things I’ve always loved about Sydney is our live music scene. Being able to go out and see a gig — whether jazz, rock, pop or a dozen others – is a part of living in Sydney that many of us take for granted as part of the rich tapestry of experiences our city offers.

Those experiences shouldn’t be denied to anyone. This great initiative by ACL Disability Services will make it possible for people otherwise limited in their opportunities to enjoy Sydney’s nightlife to share the fun and excitement of seeing a favourite band, or discovering a new one. l congratulate the staff and organisers of Gigbuddies Sydney, and wish you every success. 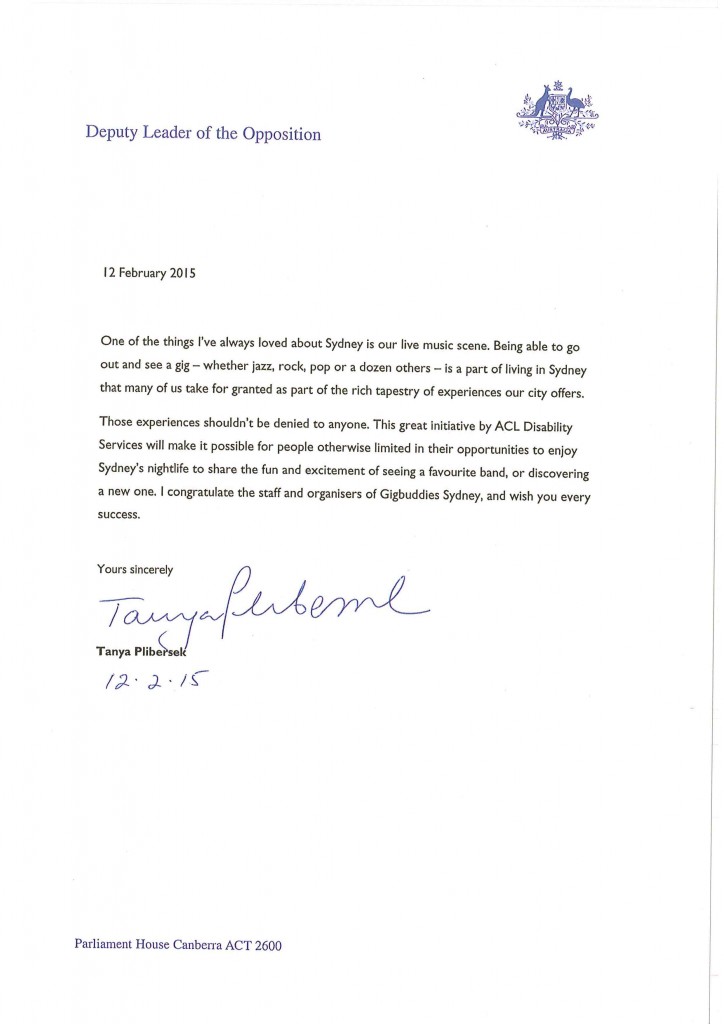 Earlier in the day Paul and Andrew met with National Disability Services, the peak body for non-government disability services. They were really interested to hear about Andrew’s work on the Q-Team, at Southdown Housing Association, and whilst our use of the word ‘quality’ doesn’t translate so well (the Australians feel like we use it in that ‘cockney’ way) the underlying philosophy behind Andrew’s work resonated with a recent consultation they’ve completed where people with learning disabilities were resoundingly saying that they want to be asked and they want to be listened to. It totally resonated with Andrew telling them that it’s not rocket science, it’s just about having conversations with people.

It was great to hear Andrew talk with such enthusiasm, passion and clarity about the work he’s involved in and NDS were excited to hear about this approach as an alternative to the top down approach where standards of quality are decided in advance by people in authority, without perhaps recognising that ideas of quality are personal and different for everyone. There is a place for this kind of quality evaluation of course, as it ensures safety and compliance but can only provide a black and white picture of a service, the work of the Q-Team enables colour to be added to that picture.

There was a real sense too about how things like Gig Buddies can aid more informal quality checking of services with volunteers being able to pick up potential issues which may get shared with them, and the need for effective systems for dealing with any information gathered.

While the system in Australia works differently to that in the UK the issues are the same as there’s many overlaps in our approaches so it will be interesting to see how this may develop.

After the meeting it was off to the launch night where Andrew was the MC and announced that he was ready to ‘unleash hell’ – but in a nice way of course.

Again it was overwhelming at the launch to hear just how ready Sydney was for an initiative like Gig Buddies and the feedback was that nobody didn’t get what it was about and has the full backing of the city council. There was also the sense that Sydney was really proud to be the first place to run the project in Australia with lovely words of support and encouragement in the opening speeches by Councillor Jenny Green, and MP Alex Greenwich. There was also a great deal of interest from other parts of Australia; Brisbane, Perth, Adelaide and Melbourne – really exciting to think how live music and volunteering has the potential to transform communities, we really can’t wait to see what happens next.

It goes without saying it was a great night, with great music and Andrew performing superbly as MC “Sydney are you ready? I SAID SYDNEY ARE YOU READY!’ – some people are just born with that ‘front man’ gene.

It goes without saying it was another late night – we’re certainly living the dream!