Gig Buddies in its first year…

In January 2013, I was lucky enough to step into the role of setting up and running the Gig Buddies project…and so began a year of adventure, where I’ve seen an incredible group of people with and without a learning disability pour their energy into getting to know another person and enjoying some fun times together.

Here’s a look back at the first year of Gig Buddies. I’ve broken down the year into themes instead of describing it chronologically, because it’s felt more like an explosion than a simple journey from A to B.

The birth: Responding to a loada stuff that has to change 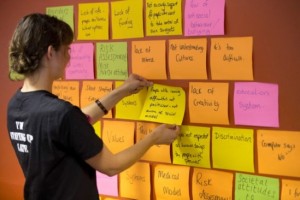 The title suggests that this is all about 2013, but it seemed right to go back further, to when Gig Buddies was an unborn foetus (no more pregnancy metaphors after that). Gig Buddies grew out of our background, as a campaign. We campaigned for people’s right to have support that was flexible, based around real lives, support that fits a person, rather than people having to live lives that fit into support. And when Stay Up Late did some research with the University of Brighton about what’s actually stopping people with learning disabilities from going out in the evenings, there were a variety of things getting in the way, not just inflexible support. Money, a feeling that it wouldn’t be safe, having nobody to go out with, transport, not knowing how to find out what’s on in your town, not having the confidence to get out there – and that age-old issue of not accessing support in the evenings, with a feeling (and often a reality) that it wouldn’t be safe to go out alone.

Whilst the inflexible support issue is something that there are increasingly less excuses for, the research showed more than a need for better disability support. There is a need to meet new people, enjoy quality time with people who aren’t paid to be there, find out more about events happening locally (because every event is an event for people with a learning disability if they are able to get there) and get over the practical obstacles to going out.

There isn’t a magical solution to any of the barriers, but Gig Buddies was born as an idea for something that could chip away at them. And Paul set about getting some funds together to make it happen.

Launching into the world 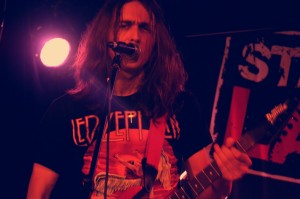 It seemed the most suitable thing to launch Gig Buddies with a gig. We had an amazing, packed-out evening at the Komedia, where, to reflect the emphasis on choice and embracing and enjoying different music tastes, the crowd were entertained by four amazing music acts representing the genres of Heavy Metal (Ryan O’Donovan), Indie (Plasticine), Pop (Daniel Wakeford) and Hip-hop (The Spoken Herd). Half the acts were learning-disabled, and a large proportion of the audience had learning disabilities. It was an amazing first step into a project about music and including everyone.

The night was covered in the Guardian, where they published a photograph taken by David, a participant of Gig Buddies. 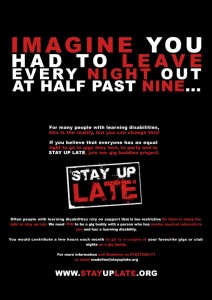 Meanwhile, I was receiving a surge of interest from people in Sussex who wanted to give some time to sharing experiences with a person with a learning disability. This poster, which aimed to raise awareness of our campaign issue and also get people interested in volunteering for the project was bopping its way around social media, and people were queuing up to get involved. There’s been an amazingly consistent queue ever since. Here’s our first social event…a picnic in the summer in Brighton. 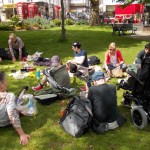 People are stronger as a group, and we wanted every aspect of Gig Buddies and Stay Up Late’s wider work to be ‘co-produced’ with people with learning disabilities (there’s an amazing blog entry about what that means written by the A Team), not just in terms of individuals leading their own involvement in the project, but also 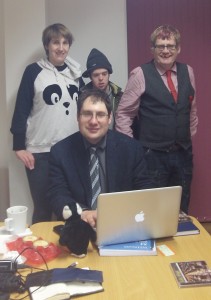 having opportunities to lead the bigger picture of Stay Up Late as an organisation and to lead the bigger-bigger picture of what the world is like for people with learning disabilities. Gig Buddies now has a group of incredible people with learning disabilities who help to decide how we should choose volunteers, plan our socials, share ideas on the Stay Up Late campaign and how you can ensure that your support is good, inspire people by blogging about the stuff they’ve done, train new volunteer buddies. They’ve co-written an article and shared what we do at conferences. 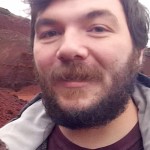 We meet once a month and they are without a doubt the best meetings I’ve ever experienced. At the beginning they were named ‘The Advisory Group’, but they democratically voted to be called the Storm and Thunder Team – suggested by DJ Thunderking, who’s pictured here next to a volcano in Iceland…

Everyone should have a cat to help them with their admin. 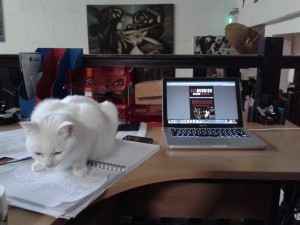 Stay Up Late are lucky enough to be a part of a project called Art-Is – a collection of organisations from across Europe sharing best practice about involving people with learning disabilities in the arts, ending in a festival in Malta in 2015. Two of our Storm and Thunder team members went to Iceland for a meeting to plan the whole project, with people from loads of countries around Europe. The people who hosted us put on an amazing show of some traditional Icelandic folk music, one of the best gigs I’ve been to in 2013!!

We broke into smaller groups to focus on different aspects of the project. One interesting discussion was around how people with learning disabilities need to be included at every level of an organisation. Daniel fed back this discussion to the rest of Art-Is in the lecture theatre.

At some point during our Icelandic adve 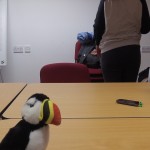 nture Daniel and Paul started an on-going disagreement called ‘puffin curry – a good or bad thing?’ which seems to somehow have become an integral part of gig buddies ever since. For example, Mr Puffin, pictured here, now attends all Storm and Thunder meetings, volunteer training, a recent conference on hate crime and all social events, primarily to reinitiate disagreement on the puffin curry issue and to exploit national rail by travelling between Hastings and Brighton without paying his fare. 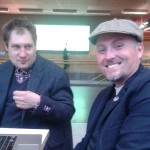 Whilst I’m on the subject of Daniel and Paul – Daniel’s contributions, as a Storm and Thunder Team member, of enthusiasm, humour, an incredible fancy dress costume for our christmas social (see below), insight and 100% unadulterated can-do attitude have been an incredible driving force behind Gig Buddies, and Paul’s humungous hard work to make things happen, huge passion for learning disability equality and seeming ability to direct a whole charity in his spare time by magic are utterly incredible.

Hopefully having not been put off by Daniel, myself and Paul’s puffin and goat impersonations during their training, I have just recruited a new group of people to be gig buddy volunteers, and as usual I’m bowled over to have such an amazing group of different people, with a real variety of experiences putting time into gig buddying. 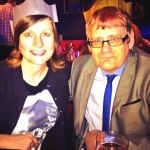 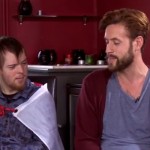 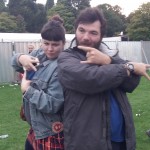 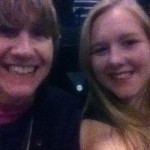 We now have around forty gig buddy volunteers – around half of whom will be linked up to their buddy in early 2014. They make Gig Buddies colourful, fun, intelligent and fresh. They keep the project in a constant state of development and I learn things every day through their insight. They’ve shown big amounts of flexibility in making sure that participants are able to say how they want the gig buddying relationship to work, how it should be planned, how quickly people feel comfortable going out in the evenings and who should suggest events…

Music, music and more music (and some fields, mud, sunshine and tents as well)

And they’ve enjoyed some music! From Dillinger Escape Plan to Pertti Kurikan Nimipäivät to Monster Magnet. Local open mic nights to Jessie J. Music that neither gig buddy has ever heard of to acts that one gig buddy has wanted to see for a long time. 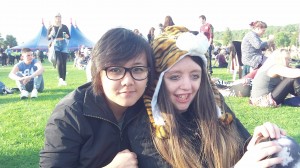 There have also been some great adventures to some festivals. Shakedown, in Brighton was a lot of fun this year. To the West of Brighton, gig buddies said great things about Southsea Fest, and to the East some good times were had at the Hastings Beer and Music Fest.

Two participants volunteered as stewards on the disabled viewing platforms at Glastonbury Festival. Obviously this was incredible. Too many music and fun highlights to list here – so I’ll share an anecdote 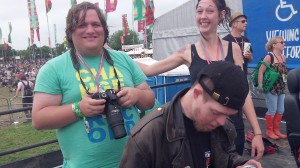 instead. We stayed in the disabled campsite (Glastonbury’s disabled facilities are quite impressive). On the last day the campsite was broken into by thieves. With the cry of thievery in the air, David, a participant of Gig Buddies, joined the efforts to ‘get them’. He succeeded in tripping a thief up and became hero of the Glastonbury 2013.

But, as some would say that there is more to life than gigs (and vigilante thief catching), people have also been to see films, comedy, clubs, the pier…buddying is what people make of it.

Bring on the future

In a recent article Polly Toynbee points out that charity’s place is to power new ideas, not replace state services (in our case, statutory support). We think that amazing, creative statutory support should go hand in hand with ways that people with learning disabilities can extend their connections beyond their support and into their community. I was really lucky to be able to talk at the Learning Disability Wales conference about Gig Buddies and what can be learnt from the project about creating meaningful connections between people and their community. There’s no limit to how much we can learn here.

In 2014 I hope to see pairs of gig buddies getting to know each other better and better and having some great times, the involvement of our Storm and Thunder Team in Stay Up Late’s work to grow stronger and stronger, and maybe some other organisations around the UK starting up a branch of gig buddies (cross fingers for now). And perhaps every person who has a learning disability having the opportunity to build new friendships through shared interest. Bring on the future. 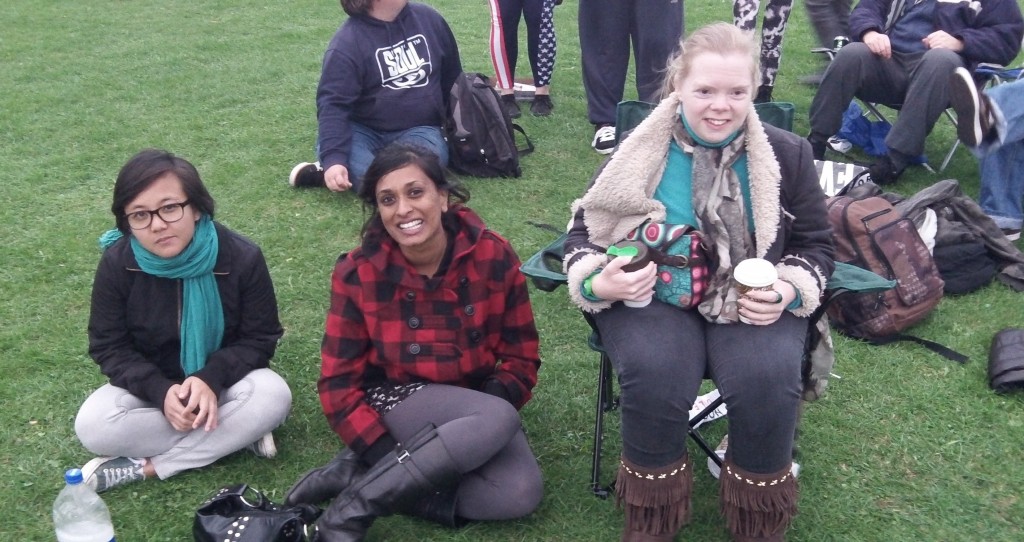