Darren reports on an evening with Argentinian experimental musician Alan Courtis, hosted by Stay Up Late on 27th February.

Alan Courtis, is in Brighton as part of his current UK tour. The previous evening was the “serious lecture” where Alan was speaking to students at Goldsmiths University in London. Tonight will be much more informal, he promises us.

This UK visit coincides with the release of a twenty-fifth anniversary box set release for Courtis’s band Reynols. The three-member band have won acclaim for their diverse and free-spirited take on experimental music. One of the other things that Reynols are renowned for, and one of the reasons why they are of particular interest to us here at Stay Up Late, is their drummer and vocalist Miguel Tomasin. Miguel, who has Down’s syndrome, is very much regarded as the band’s spiritual architect and his unique lyrics and energetic rhythms  are an integral part of Reynols’ overall sound. 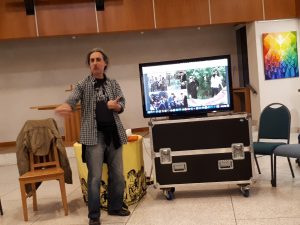 The upshot is that his experience of the past twenty-five years has made Alan Courtis a passionate as well as very insightful advocate for what he terms inclusive music. He doesn’t like the term disability he tells us. “I think it’s wrong for it to define a person in this way,” he says. Alan shows us clips of Reynols in action, including one of their regular appearances for Argentinian TV. The music is totally wild and certainly challenging but absolutely absorbing. This sets in train a fascinating audience discussion about how we listen to music, about how we absorb sound and about what our brains filter out. An audience member asks about ‘deep listening’. Alan Courtis responds by getting us all to sit in complete silence for three minutes and think about what we can hear. For me, the hum of the air conditioning and the gentle buzz of the TV equipment almost become a piece of experimental music in themselves. It means that I approach the next musical clip with a heightened awareness and a completely different mindset.

Not only does Alan Courtis leave us with a great deal to think about in terms of experimental music and inclusiveness, he also gets us all thinking rather a lot about how we listen, too. A fascinating evening.