I went to Glastonbury this year with Gig Buddies and Stay Up Late. We all needed to drop off our stuff at the office because Paul was going to travel up to Glastonbury a couple of days before and set up everyone’s tents with Madeline’s help, and also the Stay Up Late tent as well.

We all met on Monday the 23rd at the Old Steine in Brighton at 9.30 to catch the big yellow lemon bus that was going to take us there but unfortunately it turned out to be blue. 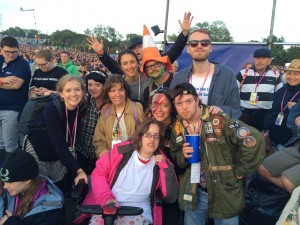 We set off on the extra long journey and the bus stopped once when we were halfway there for a lunch break. We finally got there after being cooped up in a small and packed bus. We found out that we had to carry our luggage through a couple of fields to get to the disabled campsite that we were staying in.

We collected our stuff from the reception tent and had a debrief meeting at the campsite before going to find our tents. After finding our tents we went to the Stay Up Late tent and saw Madeline and Paul and Mat who was cooking for us that night. We all went to explore what was on that night.

On the Thursday we all woke up and had some breakfast at the tent and some people went to open the Stay Up Late tent, and the others went for a wander around the festival.

I went for a walk with some of the others to the park stage and climbed up a massive hill to take a picture of the whole festival site and got a photo taken with a guy who had the same cone hat as me which was pretty cool.

Then we walked back to the Stay Up Late tent where the other guys were working and stayed for some dinner before scaring people with my scary mask. I stayed up until 4 in the morning with the guys.

Friday arrived and I was rushing as I had forgotten that I was stewarding that day after a late night. In the morning the weather was quite calm, I was working at the Park Stage viewing platform until 5.00pm with Kiera my PA for the week. I got to see some great music and I saw Pussy Riot. Sometimes it does get busy but today was pretty quiet, but it did rain heavily.

From the whole week at Glastonbury I really enjoyed seeing Florence and the Machine. Kanye West’s set was totally crap but I did get to see a celebrity with David called Rio Ferdinand, a famous footballer, which was really awesome.

I really enjoyed myself and everyone that came made it one of the best Glastonbury trips ever and if I could go again, I would go next year.