By the time you read this you will have (hopefully) caught a glimpse of who we are and what we do via the Stay Up Late Instagram page. If you’re late to the party and would like to see what buddies living Down Under are doing, click here to check out their stories.

We’re very grateful for the team at Stay Up Late for giving us a chance to tell our tale. While lockdown restrictions are not overly oppressive here in Sydney, we’re still unable to meet up in a pub as a large group. Letting us takeover the Stay Up Late Instagram account was a great way for us to celebrate our sixth birthday – thank you for providing us with a Plan B.

Between Monday and Friday of this week we would have shared well over 50 images via Instagram. You would have heard about how we came to be, in addition to seeing first-hand accounts from some of our buddies.

For those of you who would like to know a little more about Gig Buddies Sydney, we offer you the following videos.

On Tuesday we shared Stavros’ story. Here’s his interview with Australia’s national broadcaster, the ABC, that he referenced. (Keep an eye out for Eve and Lyndel who also appeared on the Stay Up Late Instagram page on Wednesday).

Like all other Gig Buddies’ branches, we’re user-led. Here’s our group, Soul Fly Band, explaining about the role they play in helping Gig Buddies Sydney be the best it can be:

And just like the Gig Buddies projects based within the UK, we’re set out to challenge the same issue: to tackle social isolation for adults with mild to moderate learning disabilities. Here are buddies Will and David, talking with the ABC, about just that:

When we started Gig Buddies back in 2015 we regular received applications from buddies who were passionate about sport. Shortly after we joined forces with NRL side Cronulla Sharks. 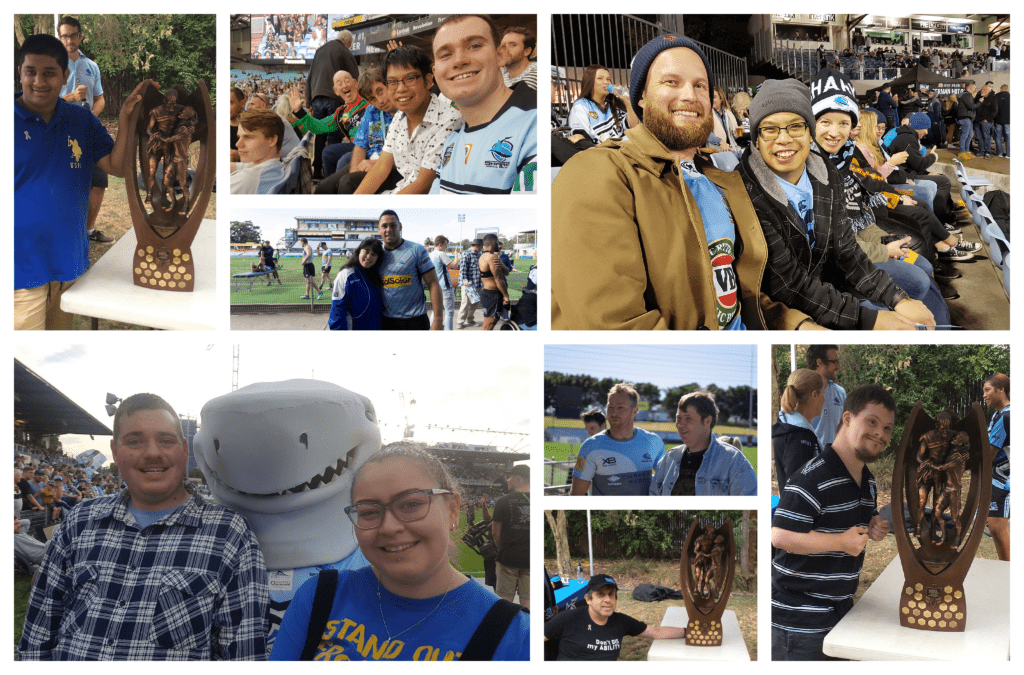 Over the course of four seasons we watched over 25 games, met with first team players and management, and also got to hold aloft the NRL trophy which they won in 2016.

Buddies also made a splash on rugby league’s The Footy Show.

Back in 2019 we took over Sydney Aquarium for our very own silent disco. We were there to celebrate the Australian tradition of ‘Christmas in July’, and a camera crew were also on hand to record what happened when we partied with the fishes.

We hope that our stories and videos have joined the dots between what goes on in Sydney in comparison to what happens across the Gig Buddies’ branches based throughout the UK. It’s a small world – please feel free to stay connected to our ongoing journey. You can follow Gig Buddies Sydney via Instagram, Facebook and Twitter (hyperlink to all social media channels).

We hope you’ve enjoyed the past five days as much as we have. The #GigBudSydney #SydneyTakeover has been a lot of fun – we can’t thank the team at Stay Up Late enough!