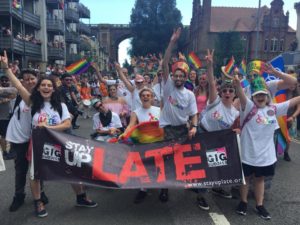 Its that time of year again … BRIGHTON PRIDE! … Thousands of people parade through the streets of Brighton spreading love, acceptance and a ridiculous amount of glitter. It’s a day where unequivocal diversity is promoted and people get to put on their best rainbow coloured suits.
Gig Buddies were no exception to this and we all danced side by side along the parade route together. We were also accompanied by our trusted wheelie bin sound system, Binyonce, which blasted out the disco classics along the way. It was amazing to see the colourful city of Brighton out in full party mode and it was even better hearing all the loud cheers for gig buddies! We ended the parade with a little picnic and a loud rendition of “gay bar” by Electric Six.

Despite Prides fabulous extravagance and focus on celebration and fun, Its serious side must not be forgotten. We live in a world where 76 countries have anti-LGBTQ+ laws, hate crime towards the LGBTQ+ community increased by 147% in the three months following Brexit and a disproportionate amount of young people are homeless as a result of their sexuality.

The work that Brighton Pride carries out and helps to fund throughout the rest of the year is essential in readdressing this inequality. Gig buddies were lucky to be the beneficiaries of a grant from Brighton Pride in 2016 and this money has enabled us to create a LGBTQ+ group called The Wild Rainbows. This money has enabled Gig Buddies staff to support The Wild Rainbows to go out together. For example, earlier in the year the group went and saw The Ladyboys of Bangkok. We will continue to promote the inclusive values of Pride and, with the help of the Wild Rainbows, we soon hope to create an easy read guide on safety that is LGBTQ+ focused.

Thank you Brighton Pride for another fabulous year in the parade. See you next year!