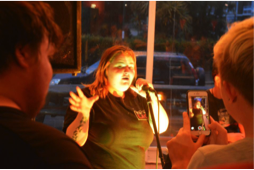 This week Gig Buddies launched in Bognor, West Sussex, by throwing a fantastic gig at the Waverly Pub.

The first act was Zombie Crash – they were VERY loud. Despite it being only 7.30pm in the evening Zombie Crash were jumping around and had great energy. It was awesome to see a band of people who have learning disabilities doing what they love and having a great time. It was amazing that they came all the way from Brighton just to play at the Bognor social.

The second person that played was called Daniel Blixareed . He was soooooo amazing! He played piano and sang really well.

Chris Love, a gig buddy from Brighton, was our in house DJ. I think Chris was enjoying seeing everyone having fun.

I gave a speech to the people that came. I spoke about Gig Buddies and explained that being part of Gig Buddies is super fun and the social at Waverly is the type of things you can do if you join Gig Buddies. I also told everyone that if they want to volunteer (which hopefully

some of them did) then they can go to the website and apply (www.gigbuddies.org.uk) . Gig Buddies is always looking for new volunteers.

One thing I noticed was that the soft drinks were reasonably price. Some learning disability nights I have gone to make the soft drinks really expensive because they know that people are more likely to drink soft drinks than alcohol. It was quite cheap for soft drinks

and this was a good thing. Unfortunately, half of the people who turned up had left by 8.30pm – even though I had a conversation with one girl who said she could “party all night”.

I have heard that this happens a lot and it has happened to people I know. Gig Buddies doesn’t think this is okay and would like to find out why this keeps happening. Through conversations that I have had with people I know, I have found out that often people have to leave early because their support say they must. Gig Buddies would also like to find out if there were other reasons why people left. For example.

If you would like to answer the above questions then please email me at:  victoria@stayuplate.org 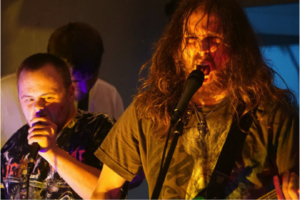