I’ve just been making the final touches to the Annual Report and wanted to share some of the highlights and work that we’ve been involved in over the last year.

All our charitable activities focus on the promotion of the rights of people with learning disabilities to be fully involved in making choices about the way that they lead their lives, and to have their lifestyle choices respected by those that support them. All our work is focussed with this in mind .

Our largest project is Gig Buddies. The project enables adults with a learning disability to be paired up with a volunteer gig buddy, a person with whom they share an interest in gigs or other fun evenings out. Participants on the project first meet a staff member for a detailed look at the type of volunteer that they would like to be matched to, looking at gender, experience needed, interests, rough age range etc. Stay Up Late then looks to recruit the right volunteer, and the volunteer is trained, introduced to their buddy and supervised as needed.

The main outcomes are to reduce social isolation and to ensure that people with learning disabilities are included as audience members in the cultural, music and other social events in their local area. At the time of referral 60% of participants only go out in the evenings occasionally, and 20% never go out in the evenings. Many outcomes are specific to different participants, for example: Being able to contribute to and lead a project, being able to increase skills, being able to travel to new places independently, better mental health, having a person to invite to other events (eg a family wedding), accessing cheaper tickets, being encouraged to make own choices and accessing other services suggested by the gig buddy or Stay Up Late staff.

Here are the main project outputs:

–        We launched the project with a gig at Komedia, Brighton, which sold out (capacity 120). Half the acts were musicians with learning disabilities.

–        We have held 6 training courses for new volunteers, covering our values, inclusion, supporting people with a learning disability, safeguarding, what to do if…s, boundaries. Another outcome from training is that friendships start to form between volunteers. The training is co-faciliated by the Gig Buddies Project Manager, a Storm and Thunder Team Member and the Director.

–        44 people have had a gig buddy volunteer over the last year (of these, 4 are currently waiting for a new volunteer and 2 have left the project). They have attended an average of 6 gigs each so around 226 gigs (or other activities that the buddies have chosen) have been attended.

–        There have been 8 gig buddies socials, including 3 meet-ups in the pub, a club night, 2 picnics and 2 gigs. Many gig buddies also go to gigs as small groups, creating their own ‘socials’ and many people use Kiss My Disco nights as socials where they can meet other gig buddies.

–        Gig Buddies has had a presence at various festivals. At Glastonbury Festival, 2 participants volunteered for Attitude is Everything on the disabled viewing platforms, supported by Stay Up Late volunteers and staff. A group of 20 gig buddies attended Shakedown Festival. A pair of buddies also attended Southseafest and the Hastings Beer and Music Festival.

–        Stay Up Late is partially led by an advisory group of people with lived experience of being gig buddy participants. They have democratically named themselves the Storm and Thunder Team.

–        One Storm and Thunder Team member attended the Trustees Strategic Direction Meeting to help steer the direction of the organization. The team have held 9 meetings and have completed a variety of voluntary work between meetings as well, for example hosting visitors in the Art-Is project, training volunteers, leading workshops at conferences, organizing events.

85% of Gig Buddy volunteers state at interview that they do not have any friends who have a learning disability. Gig Buddies seeks to dispel many of the barriers that people with and without learning disabilities face in becoming friends, through careful facilitation, support and connecting.

This project has now been completed and following the juke box’s premier at the Side By Side exhibition at the Royal Festival Hall we now have three distinct versions, all featuring a unique rhino head sculpture created by visual artists with learning disabilities and facilitator Cash Aspeek. The juke boxes contain music we’ve collected my people with learning disabilities from around the world and have been exhibited at Heart N Soul in London, the Aldingbourne Country Centre shop, Learning Disability Today at Olympia and the Learning Disability Wales and BILD conferences.

We were part of a partnership with Southdown Housing Association in developing the Q-Kit Quality Testing Tool and it is wonderful to see how they have taken this forward with their teams of peer-quality checkers conducting reviews both for Southdown and externally (for East Sussex Healthwatch).

The Kiss My Disco club nights continue to be a great success with us staging nights in a variety of venues across East Sussex. In the past year we’ve run nights in Crowborough, Lewes, Eastbourne and at the De La Warr Pavilion in Bexhill. Attendances are growing and the nights are earning a reputation for being a great night out where everyone feels welcome. These have been delivered with thanks to funding from the East Sussex Art Partnership.

We’ve had a presence at a variety of conferences over the past year:

–        The Great Escape Festival, providing a talk to convention delegates looking at ways in which we can create access to mainstream music for both performers and audiences with learning disabilities.

–        Learning Disability Today (Olympia), running an information stall with the help of one of our Gig Buddies participants. Paul was also featured in a series of short interview films which were used in the publicity running up to the event.

–        British Institute of Learning Disabilities (BILD) Annual Conference, running workshops with providers, service users and professionals to consider how we can remove the blocks preventing people really leading the lives they want.

–        Paul talking about the Stay Up late story in the People’s Parlour at WOMAD.

–        One of our volunteers organized a gig with Chris T-T in Eastbourne for us.

We were thrilled to be invited to bid for funding to be part of ART-is, a partnership between organizations in Poland, Iceland, Belgium, Malta, Spain, Finland and the UK to create a festival celebrating art by people with learning disabilities to be held in Malta in June 2015. 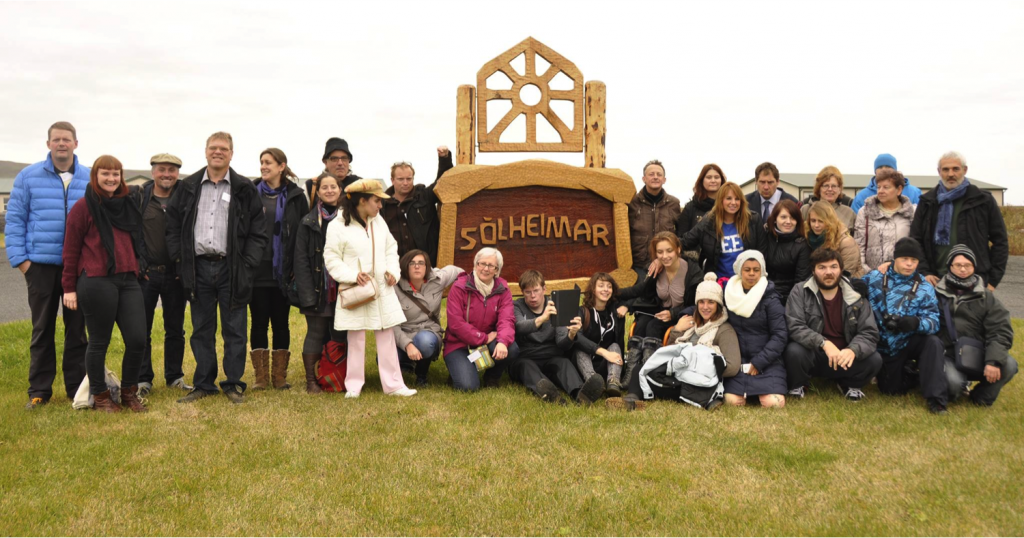 The project started with a trip to Iceland in October which enabled us to take two of the Storm and Thunder team for a wonderful weekend of work, site-seeing and socializing.

We reciprocated by hosting a visit to Brighton in March which enabled our participants to act as cultural leaders, taking the visitors to gigs in the city so we could reflect on our experiences to work in to the plan for the final festival. The highlight of the weekend for many was Storm and Thunder Team member Daniel leading a guided walking tour of Brighton.

Interest in the work of the charity continues to be high and has resulted in us being mentioned in an article in the NME about access to mainstream gigs for disabled music fans, and Paul was also interviewed on UCB radio.

We have been limited in our capacity to deliver a lot of outreach but we continue our relationship with Somerhill Junior School in Hove where Paul and members of Heavy Load are invited to take classes of children and teach them about disability hate crime, being positive about the contributions people with disabilities make to the community, and how to be little punks! 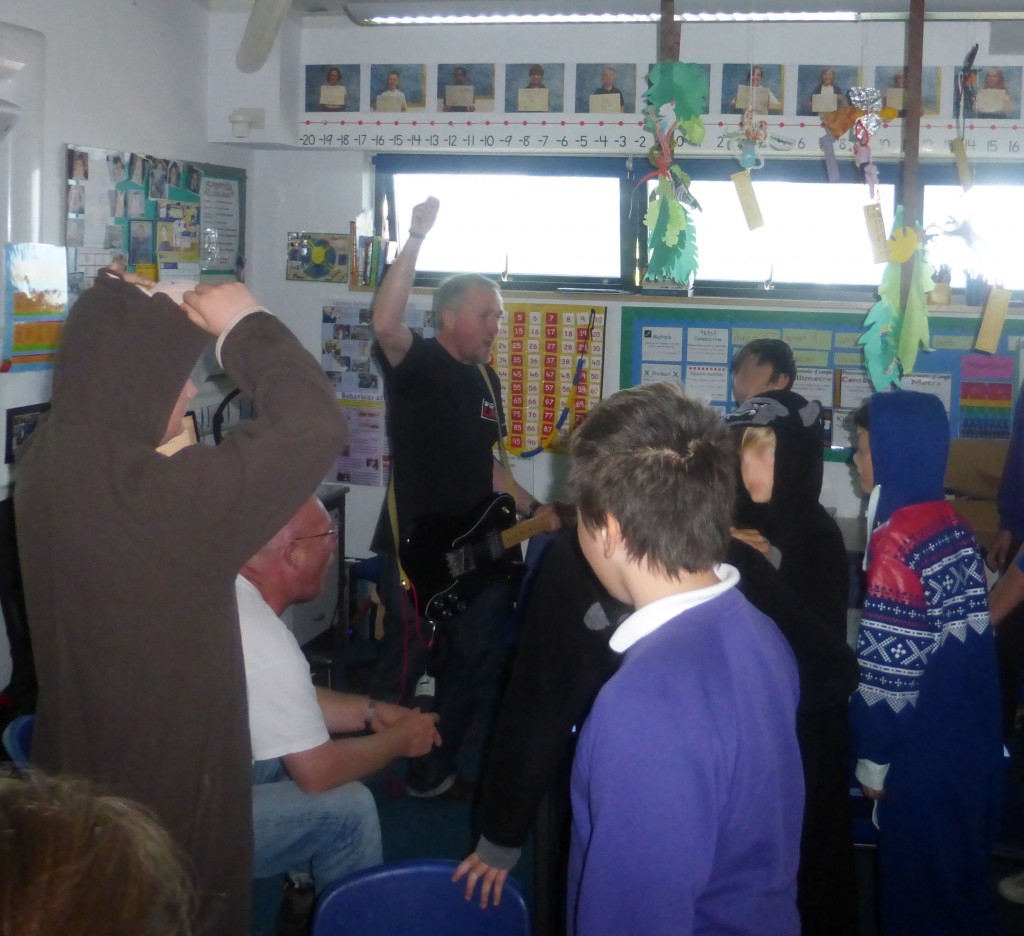 Gig Buddies started with a rented desk at Southdown’s office in Brighton but lack of space was always a frustration due to our plans to involve more volunteers and participants in work at the office. In March we were presented with the opportunity of free office space, with thanks to Centric Projects. We have now established ourselves in Prestamex House and are able to use the space to involve a greater number of people in supporting our work, running training sessions and also finding some much needed storage for our equipment.

We’re grateful to all our donors and people who help us in ways which aren’t just about giving money, and of course we’re grateful to the following people for financial support, without which none of the above would have been possible:

We’re also grateful for the ongoing support of people who put on their own fund-raising efforts to support our work, in particular Denis and Aideen Jones for opening up their beautiful garden every year.

We have also developed a relationship with up and coming band UKID who have run a fundraiser for us in Staines and are looking to support us in other ways.

Looking to next year:

–        We are actively working on developing Gig Buddies as a model to replicate (see this post for more details), and whilst there has been a considerable amount of interest in this from groups around the UK we are wanting to act cautiously so that the final model fits with our ethos, and is well thought through and trusted. We are talking to Thera Scotland about the possibility of developing the tool as a piece of Action Research, enabling a project to be set up in Edinburgh. We are also pursuing other possibilities and have secured some pro-bono support with this.

–        We have also secured some pro-bono support, through Skills Exchange, to develop a database system which is wonderful news.

–        The Gig Buddies web app has been built and is ready to go. We will launch it once we have populated it with some content. This is something that we can re-brand and offer to ‘franchisees’ as Gig Buddies develops.

–        We’re very excited to have been able to recruit Kate Ogden to support Madeline on Gig Buddies and also Jesse Cutts as an events organizer through DV8 and will be staging a series of gigs/fundraisers over the coming year.

–        We will be looking at how we can develop the ‘Stay Up Late campaign’ side of our work and assessing our impact and reach.

So now we’re looking forward to making plans for the coming year or two and the exciting stuff is about to happen, kicking off with our #punkAGM on 12th Oct, which will be an Open Space Forum where we’re inviting you to come and dream dreams and hatch plans and schemes with us.

I’ll be sharing what comes out of it soon