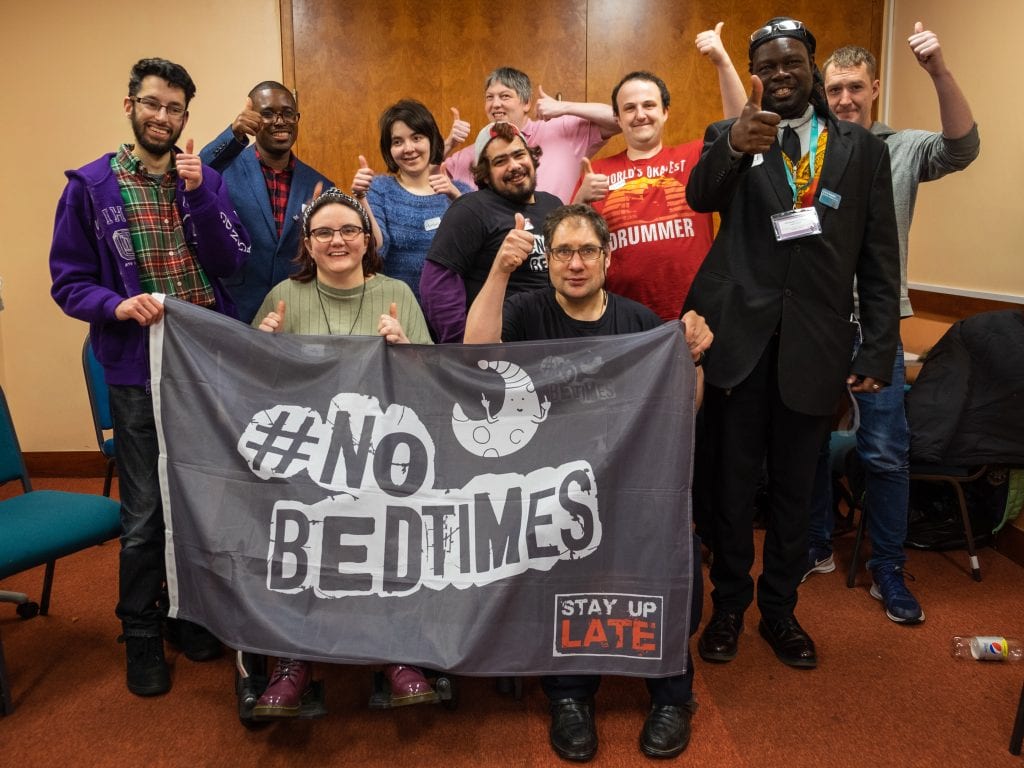 If you would like to become an Ambassador or get involved in our campaigning work in any way please contact darren@stayuplate.org

One of our newest Ambassadors Nicole says: “Hello my name is Nicole Bird and I attend the all wales People First conference which is fun. I am also part of the Gig Buddies project. I love meeting famous celebrities and going to concerts and I like music. I am having a chihuahua puppy called princess and looking forward to spoiling her.” 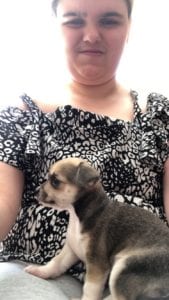 Leon Clarke is a member of Campaign 4 Change – a self-advocacy group for people with learning disabilities and autism. He is passionate about music, especially Reggae, spreads joy, has a great sense of humour and loves travelling on public transport. Leon loves to go out partying and dancing in the evenings, and he believes that every person has the right to do so if they wish to. 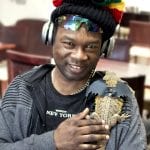 Phillip met Alison at a day service we both attended. They became a couple and wanted to marry but no-one really took them seriously. It was only with a change in support staff that things started to happen and they got married in 2014. Phillip says, “Too many people feel they need a carer’s approval before anything can happen. I believe it is up to the two people involved to decide what they want to do and they shouldn’t have to push for what is a normal thing for many other people.”After giving a moving speech at our (un)Ordinary conference in March, Phillip agreed to become an Ambassador for us. He’s been busy giving out flyers and stickers over in Somerset where he lives and recently gave a talk to students at Richard Huish College. 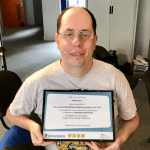 Sas became involved with Stay Up Late around three years ago when she first became matched with her gig buddy, Laura. As well as Stormzy, who she saw at Glastonbury, Sas’s big love is football and she is a huge fan of Brighton & Hove Albion. She also plays football for an awesome girls team in Brighton called BLAGGS. Sas has done many interviews about the fun she’s had as a gig buddy and the importance of people who have a learning disability being able to do the things they want to do. Sas is also part of our Wild Rainbows LGBT advisory group. Her media appearances have included ITV News and BBC Radio 5. 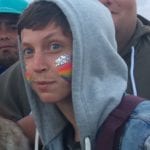 “I learnt about the #NoBedtimes campaign and I hope I can take it back to my local groups in Pembrokeshire, West Wales. I have a habit of staying up late. I love going out with friends attending All Wales People First conferences and as well as volunteering with All Wales I have a paid part time job in a restaurant in my local area and work evenings. I like a couple of hours to relax and unwind after work the same as anybody else and love concerts, discos etc.” 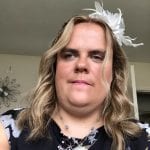 Richard lives in Cardiff and as well as being a Stay Up Late Ambassador he is also part of Cardiff People First. He likes football, wrestling, going to his local pub and going to the cinema. Richard supports Stay Up Late because he feels it’s important that people with a learning disability have a voice that needs to be heard and that they get to do the things they want to do. 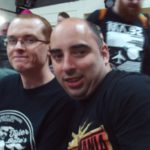 “I’m passionate about representing the views of people with learning disabilities and making a fuss wherever it’s needed. Stay Up Late is a charity that knows how to work with people with a learning disability. As well as being an Ambassador I also work as a Quality Checker for Stay Up Late. We visit people in their supported living homes and see if residents like the support they are getting. We also talk to managers, too, so we see things from different viewpoints. When I’m not campaigning or quality checking I like listening to pop music, watching sci-fi films and going to gigs.” 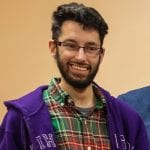 Amber works for Venture Arts in Manchester as a Public Engagement Assistant. Her role is to be an advocate for people with disabilities and work at events and on reception. Amber says, “It’s important that every person with a learning disability has the right to have a well-paid job and be treated like other people without a disability. People with disabilities have great skills that can be beneficial for a job that other people may not have. I have developed my skills in public speaking and it’s made me a bit more independent because I have my own money.” 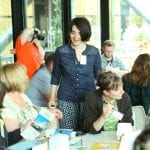 Jason works for Stay Up Late as part of the Quality Checking team and is also an Ambassador. Jason took part in a series of rap and poetry workshops putting some of Stay Up Late’s manifesto into rhyme in a way that was both entertaining and thought-provoking. He was also one of a team of people from Stay Up Late who visited Glastonbury this year, manning Stay Up Late’s information marquee throughout each day of the festival. Jason says, “If you don’t really know about someone’s disability then ask them in person or research it online. Don’t whisper about it behind their back.” 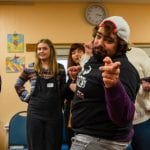 Daniel is one of the trustees at Stay Up Late and chairs the Wise Owls which acts as the charity’s advisory group for East Sussex.  Daniel says, “When we go out to gigs we want to stay for the whole thing not leave when the carer says it’s time to go. Being with Stay Up Late has been really good for me. I’ve been to gigs, I’ve been to festivals, I’ve been to conferences and I’ve run a puppet show – all for the cause of Staying Up Late and no bedtimes!” As well as dishing out flyers around shops and cafes in Hastings where he lives, Daniel has been busy giving a number of talks about the work of Stay Up Late, including organisations such as Campaign 4 Change and Seeability as well as being one of the main speakers at Leigh Day’s ‘A Fair Hearing’ conference in London. Daniel has been reporting back via a number of illuminating blogs he’s written for us. 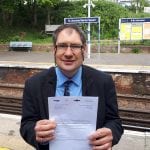 Simon is 36 and has Asperger’s Syndrome. He is chairperson and a member of Cardiff People First, a self-advocacy charity for people with learning disabilities. Simon says, “In the past 10 years I have gone from a person who mostly stayed in, in the evenings, to a person who is often out and about, either at a karaoke or open mic night or at the Odyssey (drama group) rehearsing for our next show. I have been in a supported living house for about four years and proud of the fact I can travel independently and safely to venues.“ 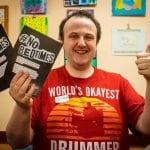 Chris’s interests are DJing, playing in two bands, cycling and drumming. He likes going to gigs and festivals and making new friends. Chris says, “When I first met the Gig Buddies team I volunteered in the office. I love the work the charity does to support people with learning disabilities and wanted to get more involved and do my bit. Stay Up Late has gone from strength to strength and it’s incredible to be part of it.” 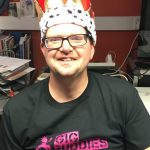 “I have Autism, Elhers Danlos syndrome and dyspraxia and I am also a part time wheelchair user. Before I received support, I used to be lonely and didn’t have many friends. But now I have support I have made new friends. Since I started receiving support, I’m a rainbow leader, I’m part of a cheerleading team I attend a weekly disco where I have been able to make new friends and gained the confidence to speak to new people on my own and go up dancing. Having support has just given me more confidence in general which has had a positive impact on my whole life.“ 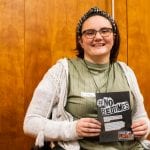 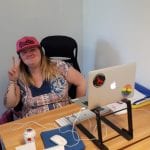 “My name is Ian Swannick. I am a man with Down’s syndrome who has a learning disability. I love football, music, dancing, singing and musical theatre – and I am a DJ with my own business. I love going out to see my friends, my local community and visit my local pub – the Master Mariner in Barry. I am a Ffrindiau Gigiau / Gig Buddies member and I help out Kai Jones with the Gig Buddies project. I love to help out other men and women with Down’s syndrome and learning disabilities. I am very interested in Stay Up Late because new friends make me more confident about myself and I can talk to other people people with a learning disability and with Down’s syndrome. All Wales People First have changed my life as they have helped me have my voice heard and my rights listened to. I am living in a supported living flat with Innovate Trust.” 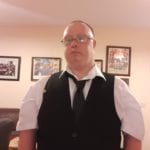 Fiifi is part of Campaign 4 Change. He likes going out, talking to people, going to football, visiting his family and going to church. Fiifi says, “Two years ago my mum died, but I had not visited her grave. My support workers supported me to go to my mum’s grave for the first time – we tidied up the grave and I had a chance to speak to my mum. I then phoned my dad who I did not see much of at that point and we met up and spoke about my mum. Me and my dad have become very close and we meet up and talk much more often.“ Fiifi decided to organise  a pool night in Croydon to promote the work of Stay of Late and to bring people and local support services together  as well as those living with relatives. Frames Sports bar kindly gave a year’s free membership to those that won together with trophies. It proved an amazing success and is now a regular event. 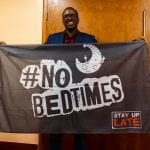 Andrew works for Stay Up Late as part of the Quality Team which looks at how well supported housing and residential care homes are meeting people’s needs. Andrew says, “I am passionate about Stay Up Late because it reaches out to so many people with learning disabilities to let them know that it’s their life and they should be able to access anything they want to. Being with Stay Up Late has given me so many opportunities, from going to gigs to visiting Australia.” Andrew recently gave a talk at a meeting of the learning disabilities group hosted by Oxleas NHS Trust in Woolwich and, along with Daniel, was one of the speakers at Leigh Day’s ‘A Fair Hearing Conference’. Other speakers at the conference included Sir Norman Lamb MP, who praised the work of Stay Up Late. Andrew was also quoted in the Guardian newspaper in an article on our (un)Ordinary conference. 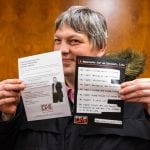 The Steel Squid Collective are a band of young and talented musicians who all have learning disabilities. The band have been playing together for over a year and are very soon to be releasing their first EP -” Vol 1. Just Getting Started!” The band have played a number of gigs in front of sizeable audiences, rocking venues such as Weston College, Tickenham Community Hall, People First events and outdoor festivals in Yatton and Bristol. The whole band have become Stay Up Late Ambassadors and are spreading the word about Stay Up Late at their gigs and we get a special mention on their EP. 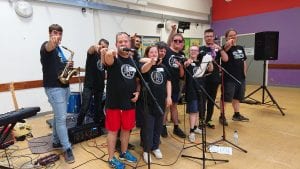 If you are interested in becoming a Stay Up Late Ambassador or getting involved in our campaigns contact darren@stayuplate.org